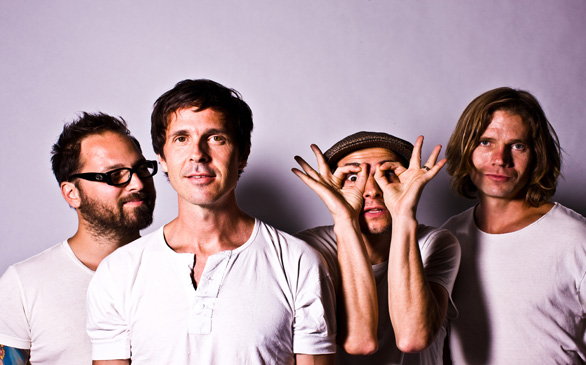 The Bootleg Theater in Silver Lake was packed to capacity for the return of Rival Schools to the L.A. area in support of their new album Pedals. The crowd was remarkably subdued for a rock ’n’ roll show, no doubt a wonderful portrait of the modern emo kid grown up. The venue itself was a strange sight to behold, with an open air warehouse feeling and a great selection of atypical microbrews.

The lack of energy was most apparent during the opening set from Suedehead, a catchy, booming rock act that should have gotten more love than they did. After an elongated break, Rival Schools took to the stage opening with “Wring It Out,” their latest single off Pedals. Frontman Walter Schreifels channeled the band’s hardcore roots with a level of energy that would have been impressive for a punk band let alone an act like Rival Schools.

The apathetic crowd perked up a bit for some old hits from their 2001 release United by Fate, but all in all it seemed more of a social event than a reunion show. And like your high school reunion, Rival Schools’ return to Los Angeles was drunken, nostalgic and a little bit awkward.