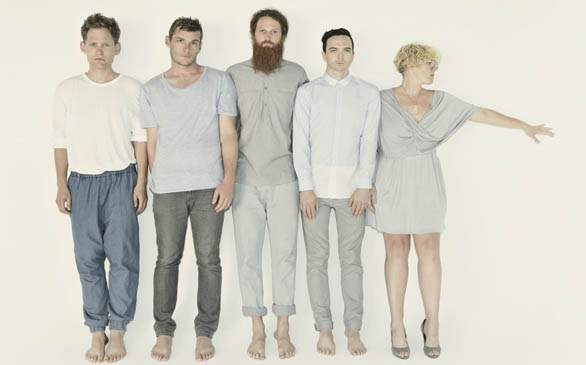 As heavily inundated as the pop music industry is with American headliners, it may be surprising to know that this year will start off its journey into indie pop with tunes straight from Melbourne from the devoted indie-pop group Architecture in Helsinki. The 11-year strong band, whose name was derived from a patchwork session using words cut out of a newspaper, recently dropped its greatest work yet in the form of a new, diversely arranged album titled Moment Bends. They bring their new sounds to the United States this week.

From the start of Moment Bends, you can hear a sound reminiscent of classic 1980’s Brit pop, albeit with the superior quality of a contemporary creation. Listening to this latest upbeat and offbeat release from the native Australian group brings me back to scenes from old John Cusack or Val Kilmer movies. Architecture in Helsinki’s new album embodies a progression to big synth to classic jam-band dynamic with incredible production values that culminate in a very catchy work in modern indie pop. Passionate lyrics and clever sounding effects make for some truly infectious listening experiences here.

The tunes are dance floor quality, with a definite organic touch that comes from hands-on creative sessions as the band melds lyrics to effects to production to track. According to Architecture’s Kellie Sutherland, the studio production process has been a large part of the model involved in making Moment Bends.

“We were really using the studio as a force for the sound. That’s really been the main sonic inspiration for the latest record,” she says. “We write at the same time [of production], the effects make the song and the production sort of shapes where it goes.”

In addition, Sutherland cites a general influence of all the world’s music throughout the ages as a guiding motivator to the AIH sound.

The band is also heavily involved in the film and media side of the industry. They work closely with directors to create authentic videos, like the modernist art deco gallery style video for their song “Contact High” that features an authentic depiction of AIH’s unique methodology.

“We wanted to have a character that was really dry but was overwhelmed by a force so to speak, and for us that force is music or love, the two main sort of things that will give you a contact high,” she says.

Sutherland sees it as a part of a whole package.

“It’s a really amazing creative outlet to not just make music, but be really across the board for all of the artwork. Everything is curated and kind of styled by us ... It’s a very natural process, like making the music,” she says.

AIH also runs their own social networking in order to stay close to their fans and propel themselves in the music industry.

“The conscious of the general population is much more visual based. We spend so much more time in front of screens ... You have a visual association with things you like and things you don’t like, and somebody can choose to filter that [according] to their personal preference. It’s important that you put out the right thing to represent you and your music. With social media, it’s great because you really get to reach out.”

AIH has been on the scene sine 2000, and Moment Bends is their fourth album, one that has really tied together the unique vision of the group like never before.

“It’s by far, for us, the thing that we’re most proud of. This is kind of the album that we’ve always wanted to make,” says Sutherland.

AIH began humbly as a high-school band gigging in local bars, and a decade later they’re hyped to be performing the colorfully honed pop songs they’ve always aspired to create.

“We have absolutely no regrets, so it feels pretty amazing to play it live. We’re looking forward to the shows,” she says.

The band has toured the world a few times already, and they’re getting set to do it again playing the Sydney Opera House, then heading for our West Coast.