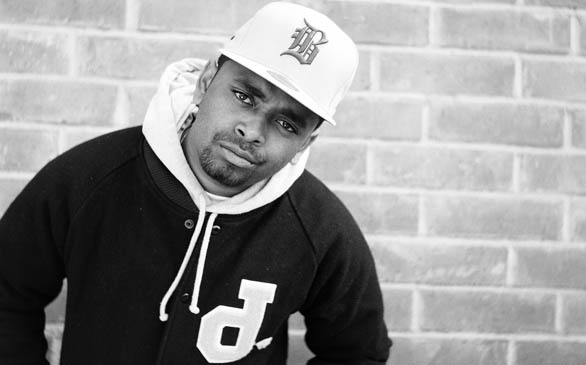 Currently, there is a lot of good hip-hop music coming out of Los Angeles, as local artists are making a noticeable effort to push the West Coast back to rap prominence. One of the rising key players in this “New West” movement is Skeme the Duke. The 21-year-old MC is a force on the mic, and with the release of his newest mixtape, The Statement, he wants people to listen to what he has to say.

Growing up in Inglewood, Skeme was always influenced by music ranging from the soulful Al Green and Marvin Gaye played at home to the classic West Coast hip-hop that filled the city. He started out rapping as a young teen.

“At first I was just messing around, not taking it too seriously,” explains Skeme, “But I was battling other rappers at the park and was getting a lot of positive feedback. When I was 15, I dropped my first mixtape, and it got good responses from people, and from then on, I just started working at it.”

Seven mixtapes later, Skeme has been working diligently to put out quality music, and at the same time, craft his lyrical skills. He takes immense pride in his work, so with each new project, he strives for improvement.

“Every project should be better than the last. I’m always challenging myself to get better and to push to myself as an artist. Pistols and Palm Trees [his last mixtape] got a lot of good feedback, and I wanted to build off that with The Statement.”

Skeme’s life and surroundings play a significant part in his music, as his lyrics reflect his individualism, experiences and the important people around him. Because of this strong connection, he raps with a lot of emotion and isn’t timid to express his thoughts. It’s no surprise that The Statement might be one of his most well-rounded works to date.

“When I dropped my first mixtape, I was a 15-year-old kid in high school, but now I’m a 21-year-old man. I rap about what I go through, and I’ve experienced a lot since then. I’ve grown a lot as a person and as an artist.”

With a strong, dedicated work ethic, Skeme made sure that The Statement met his high standards before releasing to the public.

“When you listen to The Statement, I want you to understand me as a man and that I have important things to say. That’s why I called it The Statement.”

After few listens, you’ll sense the amount of effort behind the project. The mixtape was well thought out, as all of the songs flowed well together. It starts off on a strong note with “Westside Rooftops.” Over uplifting piano chords, epic strings and the faint licks of a blues guitar, Skeme establishes that rapping is serious business to him. He conveys a strong level of confidence on “H.T.F.T”, spitting boastful lines that explain the difference between him and whack rappers. On “We On (Brand New)” he denounces all the haters, while focusing on the ultimate goal of success, proudly stating: “This I swear, ain’t no other rapper going harder this year.”

Skeme aimed for a raw hip-hop sound with The Statement. He worked with only a few producers, such as the Futuristics and Roosevelt, to create a sense of consistency and flow. Guest features are very limited, showcasing Skeme’s talents, but he did link up with a couple L.A. homies in Casey Veggies and Dom Kennedy.

Skeme is quickly establishing himself as an artist that should be noticed, not only on the West Coast, but in general hip-hop circles. He recently performed at SXSW and the Paid Dues Festival, and is frequently touring all over. His music is his voice and reflects a young man who is grinding to succeed.

“I named the mixtape The Statement, because my mom told me to say something with your music, music should have a purpose.”

The Statement is currently available for download at skemetheduke.com.