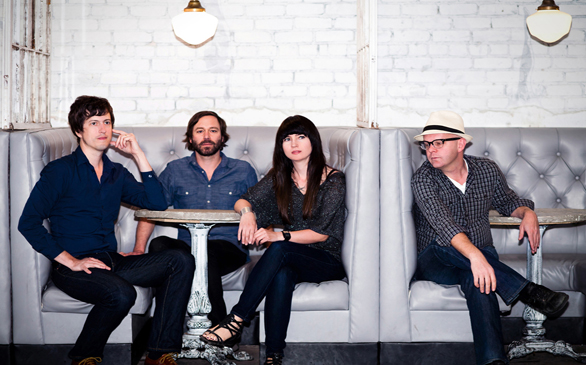 OK, this gets slightly complicated, so you might want to take notes. The Wooden Birds, the band fronted by Andrew Kenny and featuring Matt Pond, is about to release a new album called Two Matchsticks. Ben Gibbard of Death Cab for Cutie guests on the new album, scheduled to drop on June 7.

The Two Matchsticks EP, however, is already out, and you can have a copy of it for free. The three-song freebie is available at woodenbirds.com and features, you guessed it, album cut “Two Matchsticks” along with covers of the Kenny Rogers oldie “Ruby, Don’t Take Your Love to Town” and the Hall & Oates classic “Maneater.”

Of “Maneater,” Kenny says, “Hall & Oates get a lot of play in our van. On tour with the Clientele in 2010 this gem was our regular warm-up song at sound check. Over time, the goof grew into something that we worked on improving every night. We’d jam through our sound check so we could pop the collar on the song’s chorus!”

Collars will no doubt be popping when the Wooden Birds alight at the Echo for a show June 17.

In celebration of its 40th anniversary, Motown/UMe Records has released Marvin Gaye’s What’s Going On, his socially conscious and perhaps most influential work, as a special two-CD and vinyl LP set. Included on the CD portion of What’s Going On – Super Deluxe Edition are a newly remastered version of the original release and 14 rare and previously unreleased tracks while the vinyl features the “Detroit Mix:” the original and darker mix of the entire album. The package also comes with an LP-size booklet packed with photos, lyrics, recording annotations and two essays. Stevie Wonder, Rickey Minor and Janelle Monae will perform a tribute to What’s Going On July 24 at the Hollywood Bowl.

Goner Records has reissued the late Jay Reatard’s first album, 1998’s Teenage Hate, with lots of bonus material appended. Included are all the songs from two early four-track demo sessions previously only available on cassette – The Reatards Cassette and Fuck Elvis Here’s the Reatards. Scattered throughout the thirty-nine cuts are Reatards covers of songs by Fear, the Dead Boys, Buddy Holly, Johnny Vomit & Dry Heaves, Lil Bunnys, the Litter and even the Beatles. Reatard, whose real name was Jimmy Lee Lindsey, Jr., died at the age of 29 in his hometown of Memphis in January of 2010. Reatard’s death was initially investigated as a possible homicide, but the cause of death was later attributed to cocaine and alcohol toxicity.

SideOneDummy’s 14th annual Warped Tour Compilation CD, the release that many consider to be the “soundtrack to summer,” drops on June 7. The two-CD set contains 50 tracks (and five more if you buy a digital copy) and kicks off with Paramore’s summer anthem “For a Pessimist, I’m Pretty Optimistic” followed by 140 minutes of music from the likes of A Day to Remember, A Skylit Drive, Big Chocolate, Big D and the Kids Table, Street Dogs, Lucero, Sharks, Sick of Sarah, Continental and Larry and His Flask. The exclusive digital tracks are by Winds of Plague, That’s Outrageous!, Eyes Set to Kill, Verah Falls and the Human Abstract. Find the complete track listing at sideonedummy.com.

Dutch producer Sander Kleinenberg officially slips into the artist seat with the release of 5K, his debut studio album out June 14 on his own label, This Is Recordings. Kleinenberg came to prominence on the electronic music scene about a decade ago with the release of his progressive house track “My Lexicon” and has since gone on to remix tracks for Justin Timberlake, Annie Lennox, Sasha, Janet Jackson and many others.

5K is full of collaborations as Kleinenberg teams up with Ryan Starr, Jamie Cullum, Miss Montreal, Kraak & Smaak, Ace Reign and more. Kleinenberg will perform material from 5K when he appears at Sutra in Costa Mesa on June 16 and Avalon on the 17th.