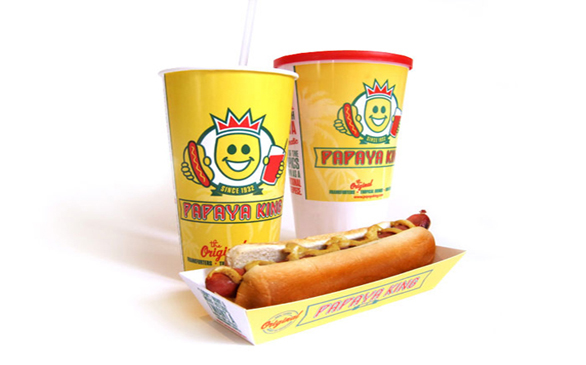 Growing up in California, I never really had a hankering for hot dogs unless I was at the movies. Something about sitting back with a giant hot dog with mustard watching the latest funniest release was fun. But in my dining-out routine, hot dogs were never on the top of that list … I don’t think I even visited Pink’s until I was 18.

Then, at the ripe age of 22 I moved to New York City, where you could find a hot dog practically on every corner. I started adding them to my weekly menu, but something about them just wasn’t satisfying. That all changed when I walked seven blocks from my Upper East Side apartment over to 86th Street to – go figure – watch a movie, and right at 3rd Avenue was a bright yellow hot dog stand named Papaya King. Now, I had already experienced a hot dog/papaya juice spot Downtown, but my partner told me that Papaya King was actually the originator of the concept and we must buy some and eat them at the movies. That year, 1999 to be exact, was when I started my love affair for all things Papaya King.

An unlikely but delicious combination of fruit juice with hot dogs started back in the 1920s with founder Gus Poulos. Having arrived here at 16 from Athens, Poulos’ early days were spent working in a deli in Manhattan. After a brief vacation in Florida, Poulos became hooked on the variety of fruit that was bountiful, especially the papayas. He took his newfound love of fruit juices back to the concrete jungle of New York and opened his first juice store. Though the store failed to attract many customers in the beginning, after a few adjustments (including Hawaiian hula skirt-wearing waitresses) the shop began to flourish within the neighborhood.

But where did the hot dogs come from? Well, Poulos was trying to impress a girl on his new pair of roller skates. He fell and hurt his ankle, and she helped him recuperate – by bringing German food from the local restaurants. Not only did that girl, Birdie, become Poulos’ wife, that is how the hot dog and juices were married.

A couple of months ago I heard murmurs about SBE, the mega developers that have produced the SLS Hotel and revamped the Abbey amongst others, opening a Papaya King in Los Angeles. Now I have to admit, the idea of a New York original not only coming to California, but under a seemingly trendy guise was slightly alarming. But then again, if anyone could bring that giant yellow-and-red logo here, I’m glad it’s someone who knows good food (I love the Bazaar!).

Los Angeles’ Papaya King is located in Hollywood, right on Wilcox at Hollywood Boulevard. A prime spot on the block, Papaya King’s bright yellow-and-red décor took me right back to the first time I walked up to the original location. As you step in and stand in line, you’ll see all the quotes Papaya King is known for, like the Kramer from “Seinfeld” reference, “I don’t want to get a movie hot dog, I want a Papaya King hot dog” and the colorful menu with fruit decorations.

The dogs are divided into three categories: Classic, Specialty and Jumbo Sausage. The Specialty can get pretty fancy with sautéed mushrooms, coleslaw, meat sauce and even cheese. I ordered my dog the same way I did long ago: the Original No. 1, please – two perfect dogs with tangy sauerkraut and New York onions or relish. The onions, sometimes called “pushcart onions,” are named from the unique way most of the city serves them sautéed in a tangy ketchup sauce. You also get a choice of the famous “tropical” juices, like banana daiquiri, mango, coconut champagne and of course, the best of all, papaya.

Ah yes, bite, chew, sip. It is the snap of the 100-percent beef, the crunchy sweetness of the onions and the tangy kraut that takes you in, but the juice that completes the exercise.

A handy tip for those of you venturing over as soon as you read this: The Papaya King experience, just like in New York, includes knowing that this place is meant for standing next to your fellow dog eaters, it’s really like a mini community. So, Los Angeles, meet the King of New York hot dogs: Papaya King.