Lesbians in Love: “The Real L Word” gears up for Season 2. 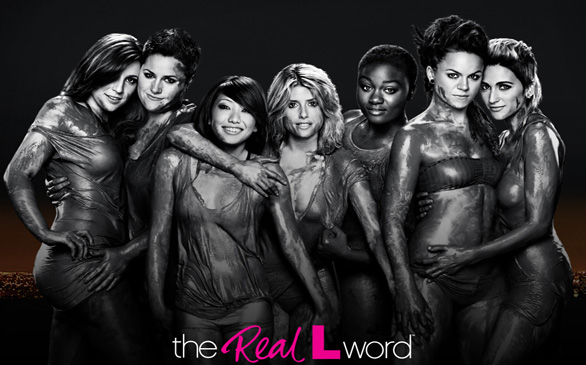 Having recently watched the final season of “The L Word” (Two years late, I know – and what was up with that unresolved murder mystery?), I find myself intrigued by the unscripted incarnation of the groundbreaking sapphic sudser. (You mean to tell me there are real-life lesbians living in Los Angeles who are just as hot as Jennifer Beals and just as cool and laid-back as Katherine Moennig?)

Apparently so. Creator Ilene Chaiken has managed to maintain her orbit around the Showtime universe to create a docudrama that promises plenty of estrogenic trials and tribulations that, unfortunately, may not be as flashy, enticing and glamorous as those Bravo “Housewives” endure week to week.

It would be easy for a first-time viewer to get lost amongst the names dropped, the partners swapped and the (mostly petty) drama dished in the slow-burning second season premiere. The first episode wastes no time kicking off with some familiar faces and an introduction to a bevy of new ladies. If you’re looking for reality-TV counterparts of your favorite characters from the scripted soap, look elsewhere (FYI: Don’t bother looking for last season’s Rose, Jill, Mikey, Tracy and Nikki either; they’ve all been given the boot.).

First, there’s the returning Whitney, the dreadlocked hipster chick who’s having a tumultuous affair with the seductive Sara and just opened her door to Rachel, the ex who moved to Los Angeles from New York. What’s a girl to do? Whom will she sleep with? Whom will she choose? That remains to be seen … well, at least until the end of the premiere when someone gets nekkid and goes, ahem, “down south.”

Another NYC transplant is Claire, who left behind her girlfriend, Vivian, to move to the City of Angels with the hopes of figuring out her relationship with former lover Francine, the Asian businesswoman/fashion model who isn’t out to her mother – yet. Then there’s Sajdah, the freshly-out-of-the-closet human rights activist who’s eager to jump into the lesbian dating scene for the first time (hello Palms in West Hollywood!); Romi and Kelsey, the couple with intimacy issues (lesson to learn: never fall asleep during foreplay); and Kacy and Cori, easily the show’s most sympathetic “characters,” a married couple struggling with the difficulties of having a baby (A sperm donor turns them down via text.). However, before that setback, one of my favorite lines is overheard during an intimate dinner: “I will love you even though your vagina’s broken.” Just the kind of conversation I love to hear over a plate of pasta shells.

While there are many great, inviting shots of Los Angeles – once described as the least photogenic yet most photographed city in the world – don’t expect these women to inhabit tastefully decorated condos and stylish penthouses. They’re keeping it real. “The Real L Word” is an unfiltered look not only at the lives of girls who like girls, but at the not-always-pretty yet laid-back lifestyle that is Los Angeles.

Such laid-backness stands out in the premiere when cameras jump back and forth between Los Angeles and New York City and set the stage for inevitable conflict. The obvious juxtapositions are made (palm trees and convertibles versus skyscrapers and taxicabs), and neither city seems to come out on top. While vacationing in the bustling Big Apple, Romi and Kelsey’s troubles come to the surface. Meanwhile, on the West Coast, Kacy and Cori leisurely browse sex shops in West Hollywood for pregnancy tools (who knew Hello Kitty made vibrators?).

A preview of the rest of the season displays the requisite ingredients needed for car-crash television. I was also glad to see the ladies all interacting with one another since the first two episodes mostly keep them and their storylines separated (boring). Tears are shed, fights break out, lives hang in the balance and one gal offers this philosophical nugget: “Bitches come and go, but friends are for real.”

If you ask me, I prefer my drama scripted.