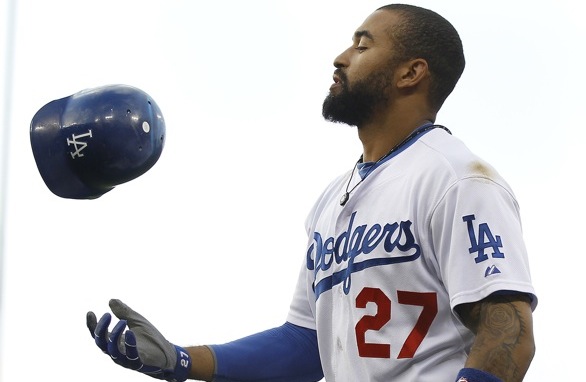 Since his break-up with Rihanna, Matt Kemp has swagger.
(Credit: Robert Gauthier/Los Angeles Times/MCT)
Wham, bam, thank you, ma’am. That’s how slugger Matt Kemp does it these days in the post-Rihanna era. The Dodger centerfielder has been getting busy hitting skins off the ball this year. Through Sunday, Kemp leads the league in RBIs and is second in homeruns and among the top five in batting average. With great speed and a shotgun arm, he has become a regular feature of the evening highlight reels and at long last is becoming a household name among your average baseball enthusiast.

The recent polls of all-star balloting prove the point. He is currently the fifth highest vote-getter among outfielders. He should be first. And he would be, if the voting public were not a mass of partisan-minded, beer-guzzling, hot-dog shoveling fanatics. (God Bless America!)

For years now, Kemp has been touted as the next great superstar. How many times have we heard about the triple threat (hitting, fielding, running), the 40-40 fella (40 homers, 40 steals)? He has always been the one not quite meeting his full potential or so they said, citing his high strikeout percentage and penchant for getting picked off base. These days, the only people complaining about Kemp’s performance are opposing pitchers. Many are blistering with pride as though he was their own first-born son making good at long last. They talk like they can read his mind: “He’s finally found his focus,” “He’s finally matured.”

The more naïve voices express the opinion that Kemp’s girlfriend of last season, the pop star Rihanna, was causing him to be less focused. Yeah maybe, and maybe not. One could cite numbers to support the view. In the years before Kemp met Rihanna, the batting averages were .342, 290, 297. After the meeting and subsequent involvement with Rihanna, the average slipped to .249. Since it became evident the two were no longer romantically engaged during the off-season, Kemp has played better than ever.

Certainly, nobody can say for sure what the Rihanna effect has been, why or how. If someone says they know, they are probably full of shit. And anyway, the polite consensus says it is rude to enquire. But, heck, it’s fun. So at the risk of sounding full of shit, I offer my own unbidden and unrehearsed perspective on the Rihanna question: I think she was the best thing that ever happened to Matt Kemp, and by extension, the Dodgers. Sure his numbers declined during the year they dated, sure he made one bonehead base-running blunder after another during that span. It very well may have been that his mind was elsewhere on those occasions he was caught snoozing on the base pads or whiffing air at the plate.

And why wouldn’t it be? Rihanna’s a fox, a super babe, a genuine hot tamale. Have you ever heard her music (rhetorical question)? The catchy little ditties flood the air waves and cover the bases from unbridled debauchery to sexual fetishism. It’s great stuff, I’m as big a fan as any, but imagine if your girlfriend sang such songs. Try picking up a glove and playing 162 games a year for a club whose owner was broke, whose manager was bailing at season’s end and which was feeling the air run out by mid-July. So Kemp had other things on his mind, things that would occupy the mind of any 25-year-old man, or any man.

Matt Kemp was born and raised in Oklahoma. He’s a country boy, essentially, playing the game of his youth, a game that has taken him to Los Angeles, the entertainment capital of the world. Since meeting Rihanna he has traveled to Mexico, to Europe, all the while partying with celebrities. The gossip pages routinely caught pictures of the couple tricked out in the latest fashions. The Oklahoma boy was having the time of his life. It must have done wonders for his ego – not that professional athletes need more ego boosting – but they do. The Matt Kemp who strolled into camp a few weeks early this spring was not the scrawny fresh-faced hopeful the scouts once knew. He was a world-traveled, celebrity-sexed stud and what’s more, he knew it.

In the game of baseball, attitude is everything. It’s what they call swagger, the potent mix of self-knowledge and self-confidence. At the moment, Matt Kemp has swagger oozing from his pores and Dodger fans can only hope it’s contagious.