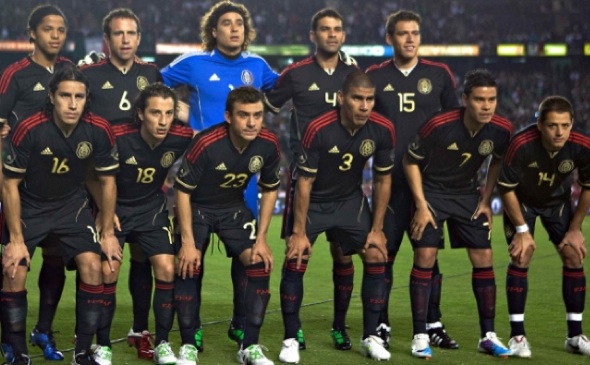 Mexico's El Tri earned a 5-0 victory of El Salvador.
(Credit: goldcup.org)
Concacaf’s Gold Cup soccer tournament has begun, and the first day of action saw clear promises from two teams representing their countries. In the tourney’s first match, the Central American nation of Costa Rica pummeled the Caribbean country of Cuba by a score of 5-0. Marco Ureña scored twice to lead the Ticos to victory.

“We were able to beat Cuba thanks to some great collective work, but we still can’t say that we’re the best,” Ureña says through goldcup.org. “Now we have to face El Salvador. We have to start thinking about them now so that we can get another win and have a chance to reach the next round.”

Ureña netted his first goal in the seventh minute of the first half before scoring his second early in the second half. Costa Rica collected two goals within the first two minutes of the 45 minutes of play.

“I think all teams go from small to big, little to large,” Costa Rica head coach Ricardo Lavolpe says. “We’re starting a new tournament here and getting to know each other inside the field. The team looked well today.”

The other two teams of Group A, Mexico and El Salvador, played the second match of the day’s doubleheader in Dallas, Texas. Mexico gained a similar win to that of the Ticos, earning a 5-0 victory. El Salvador played Mexico tightly in the first half, getting a draw by halftime. However, Mexico just took over with their physique and strength thereafter.

Group B starts Monday, June 6, at The Home Depot Center in Carson as Jamaica plays Grenada and Guatemala battles Honduras. Group C will see the United States face Canada while Panama squares off against Guadeloupe in Detroit on Tuesday.