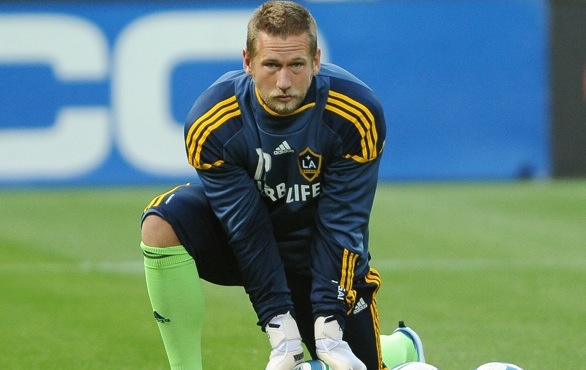 Josh Saunders is doing a great job for the Galaxy.
(Credit: Chuck Myers/MCT)
The Los Angeles Galaxy gained a scoreless draw against visiting D.C. United Friday night at the Home Depot Center in Carson in front of 20,036 spectators.

American midfielder Landon Donovan and Jamaican starting goalkeeper Donovan Ricketts did not see action with Los Angeles; both players are serving duty with their respective national soccer teams due to the CONCACAF Gold Cup tournament being held June 5-25. The Galaxy miss both Donovans as their teams continue to compete in the international tourney, but head coach Bruce Arena believes the tie had nothing to do with the absence of these players – at least not with Donovan.

“It has nothing to do with it,” Arena quickly answered with no hesitation during the post-game press conference.

Throughout the game, both squads had several opportunities to collect goals and take leads, but nothing came to precise execution in order to net goals. For the Galaxy, goalkeeper Josh Saunders had a solid game while sporadically making important saves; he totaled four saves on his second shutout of the season.

“He had a couple of good saves. I think Josh certainly did well. There is no question about that,” Arena says.

Saunders is no newcomer. He saw action in a few games during the start of this year’s campaign when Ricketts was out because of injury. Thus far, Saunders has allowed six goals in five games. Four of those scores came in the Galaxy’s 4-1 loss at Real Salt Lake on March 26 in Utah.

“Towards the end of the game, it started to open up a bit because we were pushing up to try and get the goal,” Saunders says. “Toward the end, they started to throw numbers at us, it was difficult for us to withstand the pressure, but the defense played well and helped us out.”