UCLA'S Season Comes to an End 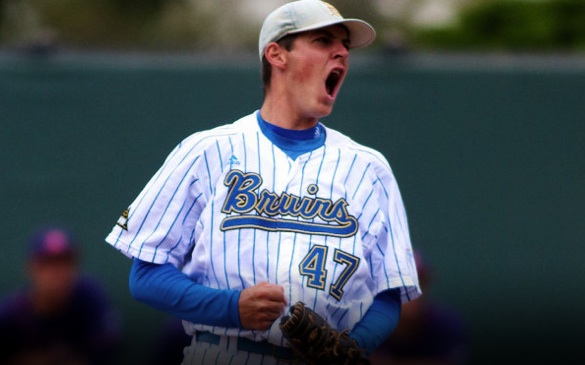 Bruin Trevor Bauer was named to the All-NCAA Los Angeles Regional Team.
(Credit: uclabruins.com)
Everything looked ideal for the Bruins as they hosted the Los Angeles Regional, but UCLA came up slightly short Sunday evening. With a one-run lead going into the ninth inning, the Bruins were on the verge of advancing to the NCAA Super Regional. However, the UC Irvine Anteaters had other plans. UC Irvine scored twice to edge the Bruins by a score of 4-3 at Jackie Robinson Stadium before 1,461 fans.

“It was one of best college baseball games you’ll see – a bunch of players going at each other, coaches, players, big moments, it was a remarkable game with young players stepping up,” Bruins head coach John Savage declares.

Starting pitcher Zack Weiss tossed eight solid innings, but the Anteaters finally got to him when it counted the most. Weiss’ line featured three runs on six hits, while walking three and fanning six.

“They’re a good team. They battled. They swing at fastballs early; they will make you pay if you make a mistake,” Weiss says of UC Irvine. “I think they’re a very good team, they do the little things right, they put the bunts down, they’re scrappy and they’re tough outs. There’s no easy out in that lineup.”

Weiss pitched in the ninth to just one batter and surrendered a walk before being replaced by freshman right-hander Nick Vander Tuig. After a double that tied the game and a bunt single that moved a runner to third, UC Irvine’s Ronnie Shaeffer lined the game-winning single down the right field line.

Shaeffer went on to receive the award for Most Outstanding Player honors on the All-NCAA Los Angeles Regional Team. UC Irvine moved to 42-16 on the year. UCLA, on the other hand, ended its season at 35-24.

“Last season was a great season, but coming into this year we said the past is past, we need to move forward,” Gelalich states. “We’re disappointed we didn’t get to where wanted to go. I know that guys who will be coming back will remember this and will hopefully learn a lot from this.”