“I Heart Hamas: and Other Things I’m Afraid to Tell You” 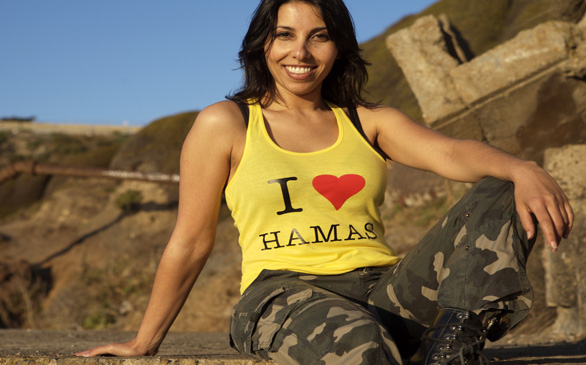 Yes, you read that correctly. No, it is not a misprint. “I Heart Hamas: And Other Things I’m Afraid to Tell You,” is a solo show written and performed by the fearless Jennifer Jajeh. The Christian, first-generation Palestinian American takes the audience on her journey as she travels to Ramallah, Palestine to escape her American-born roots, experience a new sense of freedom and to see for herself what all of the chaos is about.

Jajeh shares what it’s like to feel like an overnight outsider in her hometown of San Francisco, Calif. when the threat of terrorism was introduced to her world and the hard truth that wherever you go, even when it appears to be your homeland, there are always those who question if you belong.

She gives an inside look of what it’s like to be an outspoken, young, confused and heart-filled woman in the middle of a world that’s obsessed with violence, terrorism, marriage, age and stereotypes. Her passion for what is humane and compassionate for all sides will make you think and feel differently, whether you like to discuss politics or not. Her take on what it’s like to be a young woman who wants to do things her way will make you laugh as speaks frankly about a change of heart on tradition.

The best part is that Jajeh is able to bring a sense of humor, excitement and fun to a topic that is not only heavy but also potentially venomous if presented in the wrong context. Although lighthearted and often quite funny, Jajeh continues to bring the subject at hand back to the forefront. She asks the audience to look at a perspective of a story that hasn’t been told yet, through her eyes and experiences, asking the audience members to think for themselves.

The idea of running into the fire is not some spiritual metaphor for Jajeh. She puts herself in situations that are quite scary, but her desire for self discovery and truth is a road less traveled that seems to be well worth it.

She adds to her production by using slide shows, pop music, audience participation and an overall casual feeling which makes you feel that you’re sitting in a discussion forum at an on-campus lecture hall, not necessarily live theater. The feeling of change speaks through her stories, and though it seems unintended, you feel stimulated by the discussion. Jajeh’s story is relatable to all.

What’s great about “I Heart Hamas” is that it’s the type of show that gets an audience speaking about life and politics in a community type of way. She has many fans that have seen the show more than once. It premiered in 2008 as a part of New York’s International Fringe Festival, then ran in San Francisco for 12 weeks in 2009, on to Minneapolis and Chicago for another six weeks in 2010, and starting June 9, it will be on its second run in Los Angeles at the Hollywood Fringe Festival until the 25th. The show continues to snowball its way across the country, gaining momentum, fans and great reviews.

Lady Gaga speaks about being a misfit and having to overcome being an outsider, well, she’s not the only one representing and Miss Jajeh does it with sass and a smile. No elaborate costumes, just authenticity and honesty from the heart about her experience growing up in a very complicated and often shameless world. The stage is filled with characters that Jajeh subtly changes into as they prove her point that regardless of where you come from, it’s all relative.

The show is described as a tragicomic solo show, which is true as you continue on the journey with her and experience what she sees. Culture clashes, oppression, race relations, religious conflict, discrimination, check points and suicide bombers paint a true picture, but somehow the audience feels Jajeh’s hope and strength and are more likely touched if nothing else.