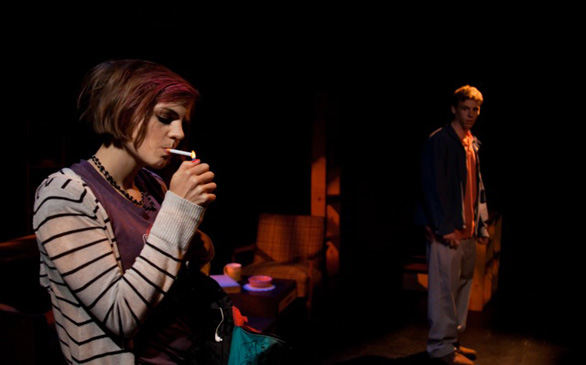 In “100 Saints You Should Know,” Matthew (Brendan Farrell) and Theresa (Cheryl Huggins) are both questioning their faith, one losing his; the other discovering hers.

Matthew, a well-educated priest, seems to be lost in thought when he runs into Theresa, the woman hired to clean his rectory. He can never seem to remember who she is despite running into her several times a week. Soon he goes off on a three-month leave from his church for reasons he would rather keep from his dogmatic mother Colleen (Pamela Roylance) and Garrett (Marco Naggar), a boy who delivers Colleen her groceries.

Meanwhile, Theresa, a single mother, tries to balance between her newfound interest in faith and her daughter Abby (Kate Huffman), a teen at the cusp of her rebellious stride. A book left behind by Matthew seems like the perfect opportunity for Theresa to track the priest down with her questions.

Although “Saints” broaches topics such as homosexuality, spirituality and teenage rebellion, it never really tackles the subject matter but rather provides an open glimpse into the complicated lives of its five characters.

The actors of the Elephant Theatre Company do an acceptable job with their characters, but things like accents and teenage eccentricities seem a little forced. But there are several strong moments between actors that enrapture the audience, mainly the ones between parent and child. (Scrabble, anyone?)

Written by Kate Fodor and directed by Lindsay Allbaugh, the West Coast premiere of “100 Saints You Should Know” is an enjoyable play that doesn’t stand out in any indelible way.