L.A. Designers Get Into the Swim 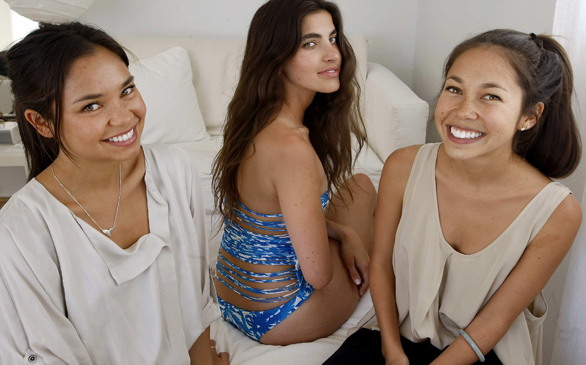 At first glance there doesn’t seem to be much to a swimsuit – a little bit of fabric that the wearer hopes will cover the necessary areas in the most flattering way and that will stay put in pool or surf.

But swimwear style changes by the year, however subtly. Pay close attention and you notice that some modern designers are eschewing embellishments, hardware and potentially uncomfortable details in favor of streamlined, seamless and versatile suits. And quite a few women seem to be paying attention. Sales of women’s swimsuits grew 8.1 percent during 2010, with sales in the U.S. market totaling just over $2.6 billion, compared with $2.4 billion in 2009, according to NPD Group, a market research firm.

In the vanguard is a fresh crop of swimsuit designers based in, and inspired by, Southern California. They approach designing swimwear in the same way others approach designing a ready-to-wear collection – with a strong focus, signature fit and comfortable fabrics that make each suit feel as if it is barely there. Forget digging and indentation marks, cumbersome hardware, underwires and all the bells and whistles so popular five years ago. Today’s swim designers love a functional suit that works as well for surfing as it does for sunning, and they design accordingly.

Southern California’s exciting new group of swimwear designers includes models and surf enthusiasts, an artist and a fashion buyer who claim to take into account everything from a good-looking backside to the functional aspect of neoprene when creating their collections. Here are a few who are making a splash.

Sisters and San Clemente, Calif., natives Oleema and Kalani Miller know firsthand what makes a practical swimsuit, having grown up surfing and eventually competing as part of the Roxy surf team through their teens. Taking into account a flattering fit, durability and ability to withstand a fairly strong wave or two, the sisters set out to create a functional line of swimwear that might also make the wearer stand out in a surf competition lineup, thanks to the vivid colors, seascape-inspired prints and sexy details.

“Growing up in a surfing environment and always wearing swimsuits had most to do with creating this swim collection,” says Oleema, at 22 a self-proclaimed free spirit with a penchant for world travel, a passion her 24-year-old sister shares. The two spend about half the year bouncing among Australia, Hawaii, Orange County, Santa Barbara and Bali – the latter where they produce their swimsuit line.

Their brand, which launched its first collection in 2010, combines a carefree athletic and colorful aesthetic with seamless, hardware-free suits whose prints and colors are inspired mostly by the sisters’ travels abroad. Suits are named for exotic settings (the Bora Bora and the Lanai, for instance). Prints include graphics that echo the jagged lines waves create when hitting the beach and an abstract interpretation of sea kelp.

Though the Mikoh line is relatively new, it made a splash early on when the suits were featured in the photo spreads in last year’s Sports Illustrated swimsuit edition. Three more of their suits made it into this year’s issue, due in no small part to the pops of color, such as citron yellow and bold teal, in their current season’s swimsuits and coverups.

“We want to wear something that you can surf in, but still looks good, makes your butt look good,” Oleema says. “It’s a good thing if you’re able to paddle out representing women surfers and look good while doing it.”

Forget overly embellished, splashy printed swimwear. Fine artist Carrie Jardine and fashion buyer-turned designer Lisa Priolo find beauty in simple, understated and mostly earthy neutral hues. For their first collection in 2009, the duo debuted a line in which all 10 styles were in a shade of nude or a glimmery gold-beige.

“We’re very inspired by the natural look of the 1970s,” Priolo says. “And everything is also hardware-free. We’re not attracted to hardware at all.”

Comfort was a motivating factor for these friends who met while living in Toronto and moved to Los Angeles six years ago, when they started the line. They despised the way bikini bottoms would dig into the hip area, leaving unsightly indentations. To keep this from happening, their suits are double-lined, with seamless construction and hidden elastic to alleviate any pressure on the hips and mid-section. Bikini tops feature multiple closures to provide more options on fit. Jardine and Priolo are the fit models for the line and road test each piece to ensure comfort.

As the line has grown, Priolo and Jardine (who combined the first two letters of their first names to come up with their company’s moniker) have stuck to their subdued, sophisticated approach to design, and they’ve started to incorporate texture by using perforated fabrics, mesh detail and tie dye patterns.

The women channel the golden sunlight and beautiful beaches of Southern California into their designs.

“Landing back in LAX I still feel like I’m on vacation,” Priolo says. “I love the lifestyle out here.”

That laid-back California vibe and the shimmery golden colors of the swimsuits reflect their love for Los Angeles and the landscape of the city.

“When I moved here, I hit the beach right away,” Jardine says. “I started surfing, which was a very natural evolution into swimwear.”

They keep their production local too, to support the area’s economy. All their suits are made in Los Angeles from fabrics sourced here.

The mantra less is more can be a daunting concept when it comes to swimsuits, but professional models Alison Renner and Scarlett Chorvat believe that when it comes to bikinis, itty-bitty can be quite flattering when done right.

They started their L.A.-based line Shimmi in summer 2009 after agreeing that the more fabric in a swimsuit, the less flattering. They set out to create a line of flirty and ultra-feminine swimsuits with bottoms inspired by the low-slung hipsters from the 1970s. Sweet and dainty florals adorn their bikinis, and a one-piece suit has an asymmetrical strap and edgy lace-up detail along one side.

They also incorporate vivid brights, such as fuchsia and a few neons – the latter of which will be used in an exclusive capsule collection for net-a-porter.com.

Though the suits may seem to be on the skimpier side, Renner and Chorvat road test each piece and make sure the suits stay put and cover the backside in the right places.

“We’re both the fit models,” Renner says. “As far as surfing in them, well, we’ll leave that to the girls who know how to surf. But we get them in the pool and make sure they don’t move or fall off.”

Their aim is to make swimwear that doesn’t feel bulky. Fabrics are all UV-protective, and suits are made in Los Angeles.

Available at net-a-porter.com, Satine and Madison.

Alexandra Cassaniti grew up surfing in Hawaii and Leucadia, Calif. But after she moved to New York and braved the brisk waves of the Atlantic, she was inspired to create neoprene swimwear that can be worn as a layer in cold waters and worn alone in more temperate seas.

Cassaniti, 28, the former designer of Steven Alan’s women’s line, is now based in Santa Monica and has expanded her neoprene suits into sexy shapes, added interesting hardware such as oversized black zippers.

For some styles, she salvages scraps of neoprene and pieces them together to form tops and bottoms. All the suits are reversible and have a sporty appeal thanks to the technical material, which Cassaniti says can be challenging to work with. The suits are made in Orange County, Calif.

In addition to her wet-suit-inspired bikinis and one-piece suits, she makes tank tops and rash guard-style tops for layering. Cassaniti also manages to incorporate neoprene into her clothing and accessories collection, edging the cuffs of a structured canvas jacket with neoprene, which she coats with recycled surf wax to make it waterproof; using the material for the uppers and linings of simple, ’70s-inspired low wedge sandals; and crafting it into a beret.

“I feel like girls don’t have a lot of choices for neoprene pieces,” says Cassaniti, explaining her motivation for starting a line of suits.

She is expanding her range of neoprene by collaborating with San Diego-based wet-suit company Matuse to create two spring wet suits.

Available at Creatures of Comfort, Opening Ceremony and Curve.

Fashion Focus
Forgotten how to get dressed up during the pandemic? Our guide to the basics
434 views
bid=||