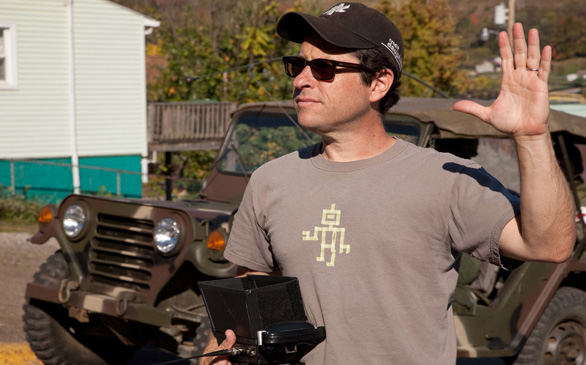 There are plenty of stories with Hollywood endings – this is one with a Hollywood beginning. A new J.J. Abrams film called Super 8 reaches theaters Friday with a coming-of-age story about young, amateur filmmakers who film a spidery space alien on the loose in Ohio during summer 1979. For people who know the 44-year-old Abrams, that plot seems only slightly more fantastic than the real-life, three-decade story that led to the film.

“The craziest thing is that it’s true, it actually did happen,” says Damon Lindelof, who collaborated with Abrams on the landmark ABC series “Lost” and the hit 2009 film Star Trek. “The more you know about the story, the crazier it is to see this movie coming out now.”

Super 8 was written and directed by Abrams, but it was produced by his childhood hero, Steven Spielberg, and at times feels like a $50-million valentine to that older filmmaker’s movies about aliens, family and family alienation. Their cross-generation collaboration on the film began, technically, two years ago when Spielberg took a call from Abrams, heard the proposed title and agreed on the spot. But, as Lindelof alluded to, the project also has a spiritual history that traces to 1982 when an article was published in this newspaper under the headline “Beardless Wonders of Film Making.” The story was pegged to a festival at the Nuart Theatre called “The Best Teen Super 8mm Films of ’81” and, as the name suggests, it put the spotlight on acne-aged auteurs who made backyard movies but dreamed of studio soundstages. The most ink was given to Abrams, then just 15, who said: “I see stuff by Steven Spielberg and John Carpenter, and I want to do it too. I’ve always wanted to be a director. I did a clay animation thing on my parents’ home movie camera when I was 7, and I’ve been making films ever since.”

The newspaper reached the office of Spielberg and his assistant, Kathleen Kennedy, who soon was reaching for the phone. Kennedy, who would later be one of Hollywood’s elite producers, had an unlikely job offer for Abrams and his pal Matt Reeves, another teen filmmaker quoted in the article. Would the pair be willing to do the frame-by-frame repair work needed to save the frayed and fragile 8mm movies that Spielberg had made in his youth? This was less than a year after the release of Raiders of the Lost Ark, so it’s a bit shocking that Spielberg’s team, with all of its resources, would entrust the one-of-a-kind artifacts to some wide-eyed kids. But that’s just what happened, and the fragile reels soon arrived at the Santa Monica home of Reeves (who, by the way, would go on to direct the cinema vérité of monster movies, Cloverfield, and last year’s well-regarded Let Me In.).

“On one hand it was unnerving because the movies we were repairing were documenting the earliest work of one of the greatest filmmakers of all time,” Abrams recalls. “On the other hand it was weird to see that his movies were as rough as mine in a way and as rough as my friend’s in a way. It was heartening and also somehow scary. ‘How could he have made movies where the cuts look like that?’”

One reel was Escape to Nowhere from 1961, which presented a World War II firefight with kids in khaki scrambling through the desert scrub of Arizona, where Spielberg spent a chunk of his childhood. The second was Firelight from 1964, a science-fiction story about a small town beset by mysterious alien kidnappings – not unlike the new film called Super 8.

Abrams grew up in a show-business home – his parents, Gerald and Carol Abrams, are producers, he with more than 50 television-movie credits, she with a Peabody Award on the shelf – and the industry always nearby for the boy, with writer-director Nicholas Meyer attending his bar mitzvah and special-effects pioneer Douglas Trumbull (2001: A Space Odyssey) sending a warm note of encouragement when he was 11. It would be wrong to say the Spielberg reels showed Abrams the industry door. They did, however, widen his view.

“It gave me this bizarre sense of connection to a man whose work I loved,” Abrams said, sitting and chatting at Bad Robot, the Santa Monica offices that are like some sleek museum of the pop culture past with vintage toys, movie props, board games and other florid relics. “Watching what he did at literally the same age, it galvanized this connection that was neither truly justified nor earned but I felt it toward him as a person.”

The connection is visible to others too. In 2006, when Abrams inked a $55-million production deal with Paramount Pictures and Warner Bros. Television, Paramount Chairman Brad Grey described him as a triple threat as writer, producer and director.

“We think J.J.,” Grey said at the time, “is the next Steven Spielberg.”

This is the summer of Spielberg in some ways, but isn’t it always? As a producer, the 64-year-old has his name on Michael Bay’s Transformers: Dark of the Moon and Jon Favreau’s Cowboys & Aliens as well as “Falling Skies,” the TNT series that launches June 19. Of all of these projects, only Super bears the name of Spielberg’s Amblin Entertainment, a nod to the depth of his involvement.

Spielberg says he has watched the career of Abrams with interest – the television success with “Felicity,” “Alias” and “Lost” and the feature-film directorial debut with Mission: Impossible 3 in 2006. He’s also been a mentor; Abrams says that when he was weighing the offer to direct Star Trek, he turned to two people, his wife, Katie McGrath, and Spielberg.

Abrams is now weighing the decision whether to direct the Trek sequel, but even if he does, Spielberg says the much smaller film arriving Friday will be the true signature moment for Abrams.

“Even though J.J. is seasoned from television and certainly from two humongous productions, to me, and I say this selfishly, this is J.J.’s first real film,” Spielberg says. “A film that came out of his heart, that he wrote and directed and it isn’t part of a franchise that was once someone else’s television series and brainchild. This is pure J.J.”