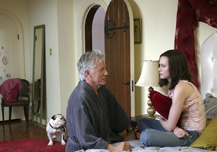 No one can accuse Evan Rachel Wood of taking the easy road to stardom.

After scoring Golden Globe, SAG and MTV Movie Award nominations for her breakout performance in the gritty indie Thirteen, Wood had her choice of projects. But few teenage roles present the kind of acting challenge she had with Thirteen, so Wood knew the next project had to be something special.

"I have to read a lot of bad scripts," she says with a laugh. "I crave anything good. I’ll do anything if I like the people doing it and it’s the right script and I think it could be fun and different."

What she chose was Pretty Persuasion, a dark comedy that is alternately shocking, funny and tragic.

The film may be set in high school, but it’s quite unlike any teen comedy that’s come before it. While watching it you may be reminded of the dark humor of Heathers, the keen clique awareness of Mean Girls and the sharp satire of Election.

But did any of those movies mix in sexual harassment, racism, dysfunctional families, a lesbian news reporter, school shooters, sleazy Hollywood casting directors and a high school production of "The Diary of Anne Frank?" These are just a few of the elements that make Pretty Persuasion so unique.

"I met with Marcos and we really hit it off," Wood recalls. "I was originally supposed to play a different part. Marcos came to me and asked what I would think about playing [the lead role of] Kimberly. I’m so glad I did. It was hard, but it’s amazing Marcos had the faith in me to make the switch."

Woods is eager to praise his young co-star, calling Wood the "absolute most talented actor I’ve worked with in a decade." He notes that many audience members may not be able to comprehend the full level of her achievement in Pretty Persuasion.

For Wood, part of the challenge was making her character someone the audience could relate to. Throughout the course of the film, Kimberly does some very cruel things, but Wood felt it was important that the audience not judge her character too harshly.

"I didn’t want her to be how everyone expects that character to be, just stupid and mean and that’s it," Wood explains. "I wanted to make her a real person even though she’s doing all these horrible things. I wanted you to see why she’s doing it and wonder if any of it could’ve been prevented."

Although she won’t turn 18 until September, Wood is clearly wise beyond her years. That’s something borne out of not only her choice of film roles, but also in how she conducts herself away from the camera. Unlike some young actresses, she has remained far above the tabloid fray.

"I live in the Valley. There’s not a lot of paparazzi there. It’s not like I’m running around complaining, ‘I’m trying to eat in peace at the Ivy!,’" Wood says, clearly mocking the young starlets who do exactly that.

It may keep her off the pages of Us Weekly, but that down-to-earth quality will likely keep Evan Rachel Wood worth watching on movie screens for years to come.