Calvin Harris: May 26 @ The Music Box 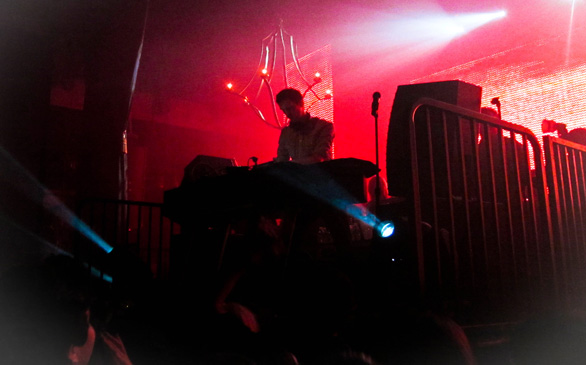 Scottish producer, singer and DJ Calvin Harris is riding a very high wave of momentum at the moment. He recently released his new music video for “Bounce,” a single off his upcoming album (due early next year), and dropped a widely acclaimed mix last week on electronic music powerhouse BBC Radio 1. Follow that up with a sold-out show at the Music Box, Hollywood’s premiere electronic music venue, and Harris is further solidifying his position as one of the genre’s top producers/DJs.

Harris has been known to put on good live shows, where he actually sings and performs with a live band, but has steadily shifted his focus towards DJing. Some longtime fans might have been disappointed, but they can’t deny the fact that Harris rocked the Music Box. He stepped behind the turntables shortly after midnight and immediately had the crowd in his control. The energetic revelers greeted him with a roar after anxiously waiting on his arrival for a couple hours.

Backed by an enormous LED wall that displayed stimulating visuals, Harris proceeded to electrify the crowd with a mix of his songs, original remixes and other dance hits. The crowd enthusiastically sang along to hits, such as the catchy “Flashback,” and danced emphatically to ever popular songs like “You Used to Hold Me.” Harris even premiered a remix to his pulsating track “Awooga” that features LMFAO, adding a “party rock” twist to it.

The Scottish DJ had excellent stage presence, an important trait for electronic DJs, and had the crowd reacting to every hand clap and fist pump. His great selection of songs kept the energy level to a maximum and had people dancing in all areas of the Music Box, from the dance floor to the rooftop, the balcony and even the bathrooms.