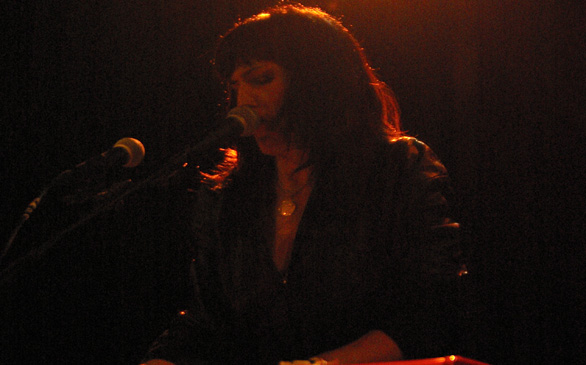 From a darkened corner in the low-lit Bootleg Theater, came the unrefined yet emotionally powerful stylings of Joan as Police Woman last Friday. Backed by a two-piece rhythm section consisting of keys and drumkit, Joan Wasser led the show in a calculated fashion bouncing back and forth between piano and guitar. Haunted by the pain of a passed-on lover, Joan as Police Woman’s musical content communicates a sense of loss that resonates through her soulful performance. It feels as though you can actually see her heart breaking as she retells her story through dark chord progressions and the cold comfort of a lonely microphone.

If anything, the show is too raw. Wasser’s emotive presence draws a sense of lugubrious depression and unbridled passion. The combination detracts from general showmanship, as she tends to leave large gaps in between songs. Attempting to fill this void with awkward onstage banter, her devoted and adoring crowd was often left wanting by her lack of engaging communication to carry along the set.

Yet despite the apparent holes in her live show, the artist is gaining momentum amidst the exhausting efforts of her current tour. Fresh from a two-month stint playing shows throughout North America, the group’s next stop is Australia, where they can only hope to increase their current fan base. Look for Joan as Police Woman to return from Down Under with a revitalized sense of energy and attention to detail. Stepping up her live show is essential if she expects to be heard by a larger audience anytime soon.