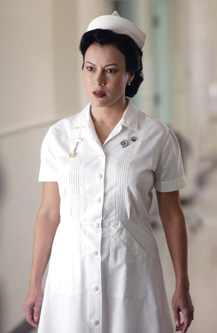 The last place audiences might expect to find Jennifer Tilly is in an inspirational movie set in the 1950s about a young Catholic boy who decides to run the Boston marathon. But that’s exactly where she is in Saint Ralph, a Canadian indie that recently hit L.A. theaters.

Making the movie wasn’t a deliberate change of pace for Tilly. Rather, it was simply a case of reading a script that was too good to pass up.

"Usually when I get a script I read a little bit at the beginning to see if I like the writing, then I skip ahead to my part to see if my part is interesting, and then if I don’t like the writing or my part I’ll call up my agent to see if they’re offering me an obscene amount of money. If none of those elements are in place I’ll say no," Tilly says in her uniquely breathless, high-pitched voice.

"When I started to read [Saint Ralph] I was so interested in what happened to Ralph and really plugged into the story that I read it all the way through from the beginning to the end. At the end, I sat there and was crying. I thought, if they realize this script the way it’s written it’s going to be a really special film."

For an actress best known for her "girlfriend" roles in films like Bullets Over Broadway (for which she received a supporting actress Oscar nomination), Bound, Monsters Inc. and both Bride of Chucky and Seed of Chucky, the role in Saint Ralph provided an opportunity to try something new.

As Nurse Alice, Tilly serves as a de facto mother to the title character, whose real mother has slipped into a coma. It’s her guidance that partly inspires him to enter the marathon – an idea that most people believe is crazy.

The film was shot two years ago in Canada and premiered last September at the Toronto International Film Festival. That may seem like a long time to wait to see your film released in U.S. theaters, but it’s an experience Tilly has gotten used to.

"The thing that’s discouraging about independent films is you’ll go and do good work and you can’t wait to see it, but apparently the rest of the world can. I’ve got eight movies in the can, some of them I finished five or six years ago, that still haven’t come out," Tilly explains.

"That’s what I like about major motion pictures," she continues. "The day we started filming (the Disney family movie) Haunted Mansion we knew what the release date was going to be. Even when the movie’s not good, when they put $50 to 100 million into a movie, they’re going to make it work. You’re going to watch that movie whether you want to or not!"

Since filming Saint Ralph, Tilly says she experienced a competition-related underdog success story in her own life.

After being introduced to poker by her current boyfriend, Tilly discovered her love for the game. Although her boyfriend told her she’d be throwing her money away, Tilly decided to enter the Ladies-Only No Limit Texas Hold’em event at the 2005 World Series of Poker. That’s not one of the celebrity poker tournaments currently popular on cable TV, but it’s a real competition in which Tilly faced off against 600 other women.

She ended up winning a World Series gold bracelet.

"When I first started playing [my boyfriend and his friends] were laughing at me," Tilly recalls. "I had this dream like, ‘I’ll show everybody. I’m going to go to the World Series of Poker and win a gold bracelet!’ I have to tell you, nobody was more surprised than me when it actually happened."