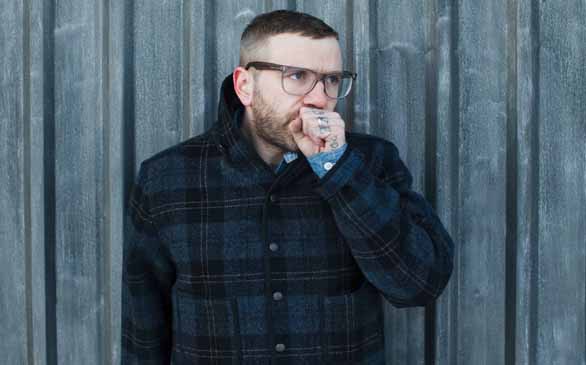 City and Colour do-it-all Dallas Green is tired of people making fun of his native country of Canada.

“What’ve you got to make fun of Canada about? Free health care? Bacon? Syrup? Governments that give you money to make records? That’s all we are,” he says.

While Green willfully admits that his country’s music contributions have been less awesome, despite being “the best of the worst,” as he says, maybe Green himself is something of a peace offering. What started as a little-known side project for Green has very quickly rocketed him into the mainstream spotlight, including a spot on this year’s Coachella lineup and a string of sold-out headlining shows. Luckily, that’s the only thing you can expect him to sell out with.

As a seasoned veteran of the road and the rock scene, Green may be slightly grizzled, neither jaded nor hardened. Even in the face of a scene that seems to value authenticity less and less, Green is on a singular mission with his latest album Little Hell: to bring the soul back to rock music. No big deal.

Green’s commitment to integrity goes back to long before his newfound notability, before anyone even knew what City and Colour was. As the co-frontman for post-hardcore band Alexisonfire, Green was no stranger to roughing it during the band’s early days.

Serving double duty between projects, City and Colour usually took the back seat to Alexisonfire until Green set out to work on his follow-up to 2008’s Bring Me Your Love, this time opting for a more formal writing and recording process.

“Up until now, I’ve never been able to just sit and write a City and Colour record, it’s always been in between Alexis stuff. I’d just keep writing until I said, ‘Oh, I’ve got 11 songs now? Maybe I can make a record,” he says.

“City and Colour isn’t just me and an acoustic guitar, it’s whatever I want it to be. I hope that everyone will expect the unexpected from me,” he says, though he adds with a laugh, “But I’m not going to put out an experimental jazz record or anything.”

Longtime fans won’t be alienated by the album, however, as Green’s signature achingly emotive vocals and often brutally honest lyrics have only gotten more effective. In “O’ Sister,” Green delicately croons out a narrative of hitting rock bottom and the impact on those surrounding the sufferer, for which the lyrical content couldn’t have been more firsthand.

“That was a tough one for me to write. I wrote that song to deal with something I was actually going through with my sister, but I know that everyone goes through that with someone they love,” he says. “It’s what being human is about, feeling emotionally connected to someone, seeing them helpless and feeling helpless in that situation.”

Green’s skill for conveying palpable emotion for a visceral impact on listeners has always been his strong suit, though, even in his much harder and grittier Alexisonfire work.

“I write very open-book, personal songs, so it’s always like a snapshot of my life. When I’m writing and singing, I don’t look at it like I’m being personal, it’s just natural to me to write that way, until people bring it up and I realize I am,” he says. “But the songs I always felt strongly about when I first started listening to music were the ones that made me feel that. Listening to Elliott Smith songs, I wanted to make people feel that way when I wrote a song.”

Even despite his newfound status as something of a media darling, even Green isn’t immune to doubts and self-scrutinizing.

“There are times when I’m like, why do I worry so much? Why am I so concerned about whether the song is good enough or if I sang well enough when people nowadays Auto-tune or have someone write songs for them?” he says.

But therein, Green manages to find his own purpose.