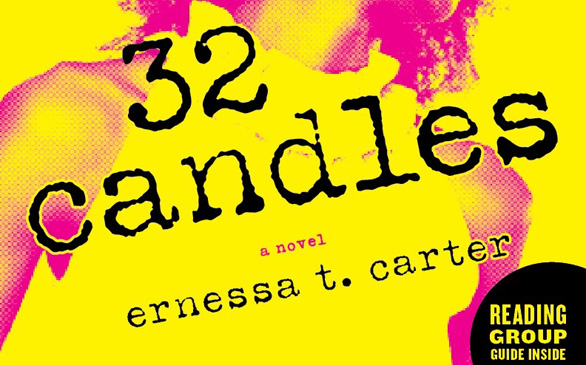 32 Candles is about Davie Jones, a modern-day ugly duckling who transforms herself into an interesting lady. The novel begins in a small town in Mississippi where Davida Jones is picked on at school because of her appearance and abused at home because of a cruel mother. The appearance of a new, ‘well off’ family in town brings a lot of excitement, but Davida is only interested in the son of the new family. The sister of the boy Davida has a crush on targets Davida, which culminates in a cruel prank.

Before the reader knows it, Davida takes a ride from a stranger and moves away to Los Angeles where she begins to find self-confidence through her job as club singer, which also enables Davida to put herself through school. After a calm couple of years in California where Davida becomes a self-assured lady, a chance meeting at Disney Studios with her childhood crush from Mississippi sends Davida’s ‘calm’ life into a tailspin.

32 Candles was a fun read from start to finish. But what makes it stand out from a typical romantic-comedy read is that the book makes it clear that nothing is black and white. Everyone makes mistakes. Everyone has baggage from childhood or specific unhappy incidents that happen throughout life.

An important part of the novel stresses that it’s important to be yourself and stay true to yourself to find real happiness, not just with a guy but also with life itself.

Davida Jones (Davie to her friends) is a true modern-day symbol for chick lit. She doesn’t physically change herself to find happiness. She works within to make herself better and ends up with a life that anyone would envy filled with unlikely friends and career fulfillment. A fun shock comes towards the end of the novel where, through a series of surprising revelations, the reader realizes what Davie was truly capable of and the admissions explain many of Davie’s actions throughout the novel. If you’re looking for a fun read with satisfying character arcs then 32 Candles fits this format as a novel that’s hard to put down.

From everything mentioned in this review it’s obvious that it could fit into a great Hollywood romantic comedy movie. 32 Candles unashamedly uses such iconic romantic comedies starring Molly Ringwald (16 Candles, The Breakfast Club and Pretty in Pink) as inspiration for Davida’s love life.  32 Candles brings many of the classic ‘80s movies into a modern format.

References throughout the novel about Hollywood life are also cool for anyone interested in some of the things that happen in the movie world. I also predict that the soundtrack to accompany a film version would be just as fun as the movie.

If you’re ready to laugh, be inspired and discover a new literary heroine, check out 32 Candles. It’s not a novel that you’ll forget anytime soon, and you’ll find yourself wanting to know what’s next from the literary world’s newest talent: Ernessa T. Carter.