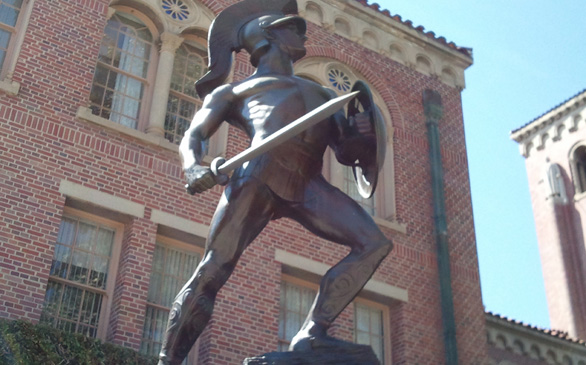 The University of Southern California is one of the most prestigious universities in the world, known for outstanding academics, a dominant football program and its extensive network known as the Trojan Family. But due to recent scrutiny from the NCAA and wild acts done by students on campus, after its long reign has the glory of Troy begun to collapse?

In the past two years alone, USC’s football program was suspended from attending any bowl games for two full seasons with a high reduction in their scholarships. Most recently the NCAA rejected USC’s appeal to reduce the sentence to only one season. So, unfortunately the Trojans will not be able to participate in post-season play of the newly established Pac-12.

USC has lost top recruits due to sanctions, and unfortunately the dedicated players here have had to suffer from the mistakes of past players. But even so, the athletic program continues to rebuild its image through players such as football quarterback Matt Barkley and wide receiver Robert Woods.

“It’s still USC football … regardless of rules, we still dominate. We’re the NFL team of L.A.,” says Robert Stephens, a sophomore at USC.

USC’s basketball program also faced scrutiny as they self-sanctioned themselves during the 2009-2010 season. They had to vacate their wins from the 2007-2008 regular season, after violating NCAA rules regarding former Trojan O.J. Mayo.

Apart from athletics, this past semester two students were caught having sex on top of Waite Phillips Hall; the male was identified as a member of USC’s Kappa Sigma fraternity. Photos were taken of the couple in various sexual positions and later leaked to the media.

“I was going through airport security, and was wearing my USC jacket. One of the security guards said ‘Oh, USC ... that’s the school with those people having sex on the roof right?’” says Danny Ramirez, a junior at USC. “I laughed, but was surprised that of all the things USC is known for, people having sex on a roof was what came to mind.”

Kappa Sigma had been in the news once before when an e-mail sent to its members went viral. The message referred to women as “targets” and asked members to spread the names of the women they have had sex with. The e-mail provided code names, categories by race and a rating system so members could create their lists. Investigations were conducted and found that the e-mail had not come directly from the fraternity, but by then the damage had been done.

“I think, from an administrative point of view, these acts are considered extremely harmful, because it might affect who will fund or donate a vast amount of money to the school,” says Tatiana Hernandez, who is looking to apply to USC for grad school, “but then again, from a young adult’s perspective, a lot of people brush events like that off because they find college to be experimental.”

Although USC has taken some hits to its reputation, if anything it has only strengthened the student body. Since the NCAA sanctioned the football team, the support from the student section has only increased, and thousands continue to fill the seats of the L.A. Coliseum.

The acts on campus have actually initiated students to take action by conducting a walkout on campus to protest sexual violence. They hosted seminars about how silence is not consent and how students must respect the female body.

USC will always have its share of detractors; since it is held so high on a pedestal, every move will be under a microscope. But as a Trojan Family, under great adversary students have shown that the criticism will only create a stronger bond among current and former students.

Troy continues to stand tall; as long as the USC student body acknowledges its mistakes and does what it can to not let unsavory acts go unpunished, this empire will cease to fall.

All Trojans can do is continue to look forward to the new semester, season and year. They must learn from their past mistakes and turn weakness into strength. By doing this they will rise from the criticism and learn the true meaning behind FIGHTING ON!