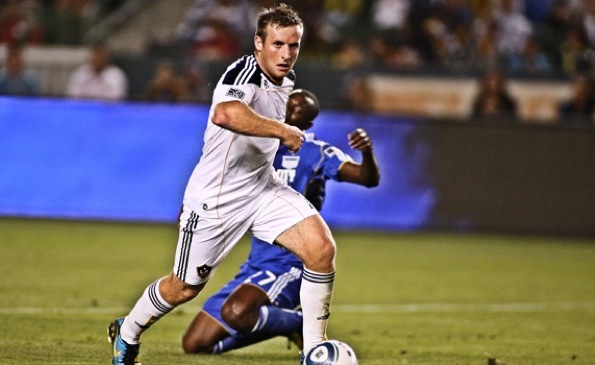 Chris Birchall netted his first career MLS and team goal Saturday night.
(Credit: lagalaxy.com)
Seconds away from sealing a victory at the Home Depot Center Saturday night before a crowd of 20,675, the Los Angeles Galaxy allowed a late tying goal to Toronto FC and settled for a 2-2 draw. The tie shifts the Galaxy’s overall record to 8-2-7 with 31 points, good enough still for a best mark in the league while placing at the top of the Western Conference. Also, the Galaxy improve their unbeaten streak to seven games, going 4-0-3 in that period.

However, Galaxy head coach Bruce Arena was not pleased with the result.

“Disappointing result, certainly to work as hard as we had to work in this game. Give Toronto a lot of credit, I thought they played real hard,” he says during the post-game press conference.

“It’s nice. It has been a long time coming, two years,” Birchall says of the score, which came in during his 48th game played. “The guys have been giving me a bit of stick in the locker room, but a few people tonight said I would get my goal and it came to me in this game so I’m happy.”

“Those goals are very important, especially that late in the game. I thought it was the winning goal, so it meant a lot,” Ángel says.

Gordon knotted the score yet again three minutes later and seconds away from the game ending.

“Give Alan Gordon a lot of credit, great goal at the end,” Arena adds. “We had a bunch of guys standing around, we got out competed at the end of the game in that play. Give him a lot of credit. He did well, he took that chance well.”

The Galaxy aim to get back to their winning ways on Saturday, June 18, as they visit the Colorado Rapids for a 6 p.m. start time.

“We still need to sharpen some things up,” Galaxy defender Sean Franklin says. “We talked about it the whole year that’s probably like one of the last things that we need, the final third, to make smart passes. I think if we focus on it we will be fine for the rest of the season.”