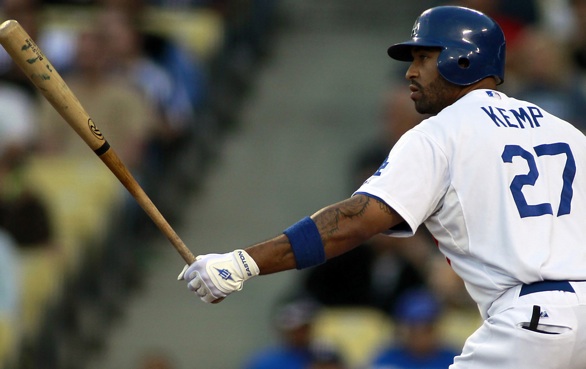 Los Angeles' Matt Kemp stands at the plate during a game against the Colorado Rockies.
(Credit: Luis Sinco/Los Angeles Times/MCT)
The season has been shaky thus far. The ownership conflict is ongoing. The investigation from Opening Day’s assault on a Giants fan is perplexing, to say the least. Nonetheless, there is one Dodger who is performing above par, above everyone on the team and perhaps above any other in the league.

Although the Dodgers carry a 31-36 mark and are in fourth place in the NL West (6.5 games behind), they truly do remain with a chance to be atop of the division. And with his vigorous play of late, Kemp displays an honest belief in that.

Take Los Angeles’ last road-series as example. Kemp brutally destroyed the Rockies’ pitching in Colorado, as both groups split the four-game set. In the first game of the series, Kemp went 3-for-5 and was a single shy of his first career cycle. He grabbed three RBI after a homer, triple and double in the team’s 9-7 loss.

In Friday’s 6-5 defeat, Kemp ignited a comeback as a pinch hitter in the ninth inning with a solo bomb that helped the Dodgers grab an additional four runs and close the score to one run, but it was not enough. Kemp, however, did damage yet again.

Kemp kept the offense coming in the last two games (Saturday and Sunday), where the Dodgers earned much needed victories. He produced performances of 1-for-4 with an RBI, double and run scored, and 1-for-3 with a homer, RBI and two runs scored, respectively.

And now, Kemp leads the NL with 20 home runs, is second in RBI and third in batting average.