Mexico Cruises into Next Round 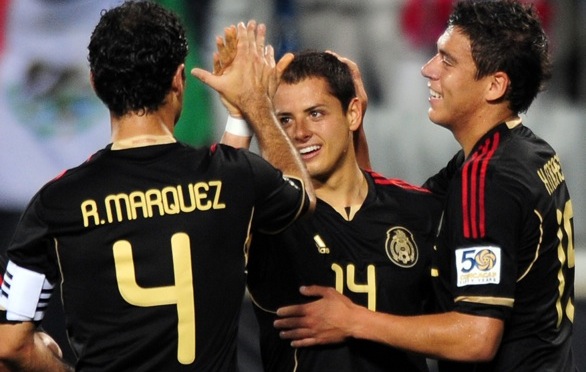 Mexico's Rafael Márquez, Javier Hernandez and Hector Moreno congratulate one another.
(Credit: Jeff Siner/Charlotte Observer/MCT)
Mexico is the only soccer squad who has been consistent enough to earn respect from the media and other teams. After a 4-1 comfortable victory over the Central American nation of Costa Rica on Sunday in Chicago in front of 62,000 fans, Mexico quickly became the first to qualify for the Gold Cup’s quarterfinals this coming Saturday, June 18, at the New Meadowlands Stadium in New York.

Mexico head coach Manuel de la Torre knows that an even more important feat has yet to be accomplished.

“The main objective is to win the Gold Cup,” he tells the Associated Press after the victory. “This group very much knows what it needs to do to represent Mexico. Whatever situation is presented, the team knows the only way to get where we need to go is on the field. It’s true we played a good match. But there is always room for improvement.”

With the three-goal win, Mexico earned its third triumph in the group stage. They pummeled El Salvador 5-0 in their opening match before sending Cuba to the same result of 5-0 in both squads’ second affair of this year’s tourney. Thus far, Mexico is the clear favorite to top every other competing country and, therefore, take the competition’s trophy back home.

Costa Rica, who beat Cuba and tied with El Salvador, came in with some confidence in the efforts of shutting down El Tri, but that did not work.

“All losses are ugly. You don’t want to lose,” Costa Rica head coach Ricardo La Volpe confesses to multiple media outlets. “You win and you lose in soccer. Today, I lost. But I’ll repeat it; this doesn’t end here. There is a rematch. The ball keeps on rolling.”

All of Mexico’s scores came in the first half, starting with veteran defender Rafael Márquez’s heading goal in the 17th minute to give them 1-0 lead. Márquez’s unstoppable run inside the box off of a Pablo Barrera well-placed corner kick ignited the powerful heading score.

What followed was a serious of unfortunate events for Costa Rica. Left flank midfielder Andrés Guardado blasted two left-footed shots within a span of nine minutes to give Mexico a commanding 3-0 advantage by the 26th minute mark.

Guardado directly shrugged off critics after the win.

“We expected a tougher game,” he tells concacaf.com. “But I think we did everything right.”

“We faced a great rival, and we were able to make them suffer early so we could better manage the circumstances,” de la Torre adds. “We made things complicated for them, and that opened up the way.”

In the second half, Costa Rica finally netted a score when Marco Ureña chest-trapped the ball and watched it hit the ground before releasing a potent right-footed blast past Mexican goalkeeper Alfredo Talavera into the upper-right corner.

Team captain Bryan Ruiz, who was credited for the assist on Ureña’s goal, signals a potential flaw of inexperience for the Costa Ricans.

“There are very young players on this national team. Maybe it’s the first time that they played in front of a sold-out stadium,” Ruiz says to reporters. “That is against us, against a team with players that succeed in Europe. I think that was very difficult for many of them in the first half. In the second half, we were able to position ourselves better, but it was too late.”

Despite the loss, Costa Rica qualified to the quarterfinals stage, having done so in second place with four points that include a win, a tie and a loss.

La Volpe claims that Mexico always carries a solid team in all competitions.

“Mexico has been a very competitive team for a long time,” he states. “This is nothing that’s new. It always plays at a high level with players that can throw you off balance.”

La Volpe used to lead the Mexican national squad via coaching, primarily in the 2006 World Cup held in Germany where he directed them to a second-round finish.