Dodgeball: There’s Something About Ben Stiller in Dodgeball 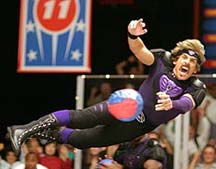 He’s the most dangerous player in his profession. He manipulates, uses massive strategy and he’s extremely focused. In due time, sport stars like Shaquille O’Neal and Michael Jordan will need to make room for … White Goodman. OK, so maybe that won’t happen, but it will be the closest thing to sports fame that actor and comedian Ben Stiller will ever achieve.

As Goodman, Stiller shows his fierce skills in Fox’s Dodgeball: A True Underdog Story. And only Stiller — known for over-the-top turns in films like Zoolander and Heavyweights — could produce a movie about a childhood sport, gone extreme.

"I just felt it was funny. You don’t read that many funny scripts that have their own tone," Stiller says, explaining why the script for Dodgeball caught his attention. "I thought it had a very clear tone that [writer and director Rawson Marshall Thurber] wanted to hit, which was sort of this retro, ’80s movie thing, that wasn’t satirized. I thought it was a great idea. It was very different."

Like many everyday folks, Stiller played the game as a kid but never really thought about it again until the movie idea was presented to him. Unfortunately for Stiller, though, he couldn’t aim right playing dodgeball if his life depended on it. He says that bad feelings came with the "humiliation, in front of people, of not being able to hit the target." Yet, on the brighter side, he didn’t get hit as much as the other people on set, but did manage to successfully strike his wife and co-star Christine Taylor often — and, according to the actor, paid for it later.

Born into a comedic dynasty, Stiller — whose parents are comedians Jerry Stiller and Anne Meara — has been associated with a number of films throughout the years, both as a star and as a director. He pulled double duty on Reality Bites (1994) and Zoolander (2001) and provided comic relief in There’s Something About Mary, Meet the Parents and, most recently, Starsky & Hutch. His White Goodman character in Dodgeball, however, isn’t as loveable as some of the other personalities he’s portrayed. Instead, Goodman is an egomaniac whose brain cells are dying slowly from sheer stupidity.

"I had so much fun doing Heavyweights that it sort of came out like that thing we did on ‘The Ben Stiller Show.’ This was just another opportunity to take off in that world," says the likeable actor. Stiller also has one intimate scene in the film with a hot slice of pizza that will definitely leave a lingering impression on the audience.

In Dodgeball, Stiller’s Goodman is captain of a team called The Purple Cobras. His archrival is Peter LeFleur, played by his real life buddy Vince Vaughn, who also portrayed Stiller’s adversary in this year’s Starsky & Hutch. According to Stiller, he and Vaughn had a ball re-teaming so soon.

"I think he’s a comedic genius, I really do," says Stiller about Vaughn. "He’s got a persona that is so real, funny and unique. What he could improvise in character is usually funnier than anything that’s written down. I find him incredibly funny and very smart, [with] such crazy energy about him."

Not only was it great working with a friend, but Stiller adds that it was also nice to work again with his real life leading lady, Christine Taylor, because they got to hang out and enjoy each other’s sense of humor.

"It was more like having fun. We weren’t thinking about how strange it was that she was in an S&M outfit and I was in a unitard," says Stiller. "I had a moustache and a wig — when you analyze too much, then it gets strange."

Dodgeball also gave the happy couple a premature empty nest feeling, as they often weren’t able to be with their 2-year-old daughter Ella Olivia. Yet Stiller assures that he and Taylor will have some semblance of balance combining their work schedules and home life. For now, though, Stiller enjoys paying homage to the childhood game of dodgeball and leaves this tip for future players: "Throw hard, catch other people’s balls, and most importantly, get out of the way."

Dodgeball is currently in theaters.