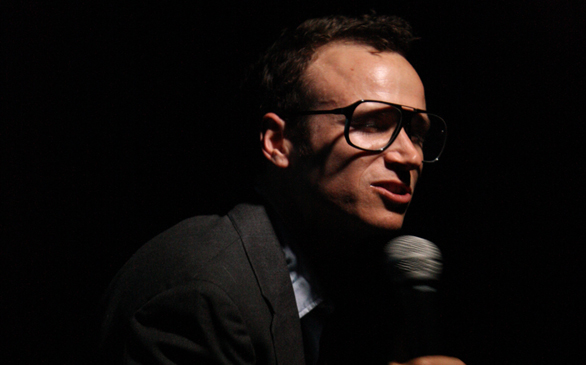 Things are looking up for Charlie Max, a reporter on his last leg, when he thinks he sees Nancy Fullforce minutes before the media announces the premature demise of the rock celebrity. It’s up to Charlie to find out if the rock star staged his own death in a bid to report a story that will define his career. What follows is a rock ’n’ roll-laced chase to discover the truth behind Fullforce’s seemingly fake death.

Writer-director Jasten King, who also plays Nancy Fullforce, does just about everything else in “Charlie!” adding lyricist and videographer to his credits. But King’s 100 mile-per-hour storyline can be hard to follow at times to the point where Charlie has to monologue in the middle of the play just so the audience can keep up.

The show, which runs just short of an hour, has a frenetic tempo perhaps due its rock ’n’ roll nature.

“Charlie!” does some interesting things with its limited set, projecting pre-recorded videos that are timed with the script, at times adding and at times detracting from the hectic viewing experience. A show with entertaining rock ’n’ roll musical numbers such as “Charlie!” deserves to have louder acoustics, and ultimately suffers in its uncomfortably small venue.

“Charlie!”’s other strengths are a blend of its animated characters and strong actors. Robin Hall expertly plays a desperate Charlie, and Tyler Clement (‘Horsey’) is equally amusing as the disinterested associate of Charlie’s. But it is Kelly Mantle who stands out, both figuratively and literally (in stilettos), for his jocular performance as Kitty Glitter.

Billed as a show for people who don’t like musicals, “Charlie!” is filled with great individual components all compressed into a way-too-short amount of time, but even though it’s a brief one, “Charlie! The Death of Nancy Fullforce” stands out as a unique experience.