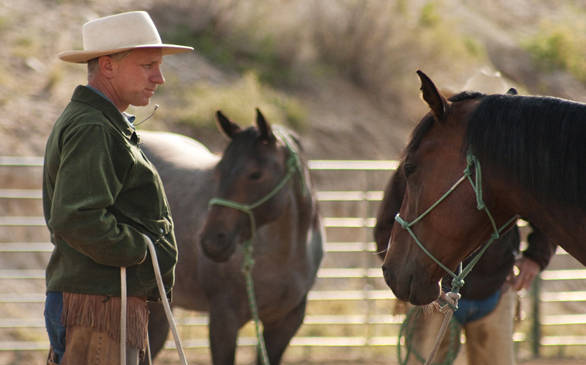 Winner of the Sundance Film Festival’s Audience Award, Buck follows horse trainer Buck Brannaman, inspiration for both the book and film versions of The Horse Whisperer, as he traverses the country teaching four-day seminars for nine months out of the year in the ways of natural horsemanship.

Brannaman, an individual one might envision when thinking of the ideal all-American cowboy, is a compelling character that dispenses his Zen-like wisdom to those trying to solve their equestrian problems through means of trying to understand the majestic creatures rather than just trying to “break” them. We soon find that much of Brannaman’s empathy comes from his own history of being abused by his biological father; leaving him emotionally scarred and eventually placing him in foster care where he begins his healing process. Eventually Brannaman finds his way to the seminar of one Ray Hunt, recognized as one of the pioneers of natural horsemanship, and becomes his protégé.

It’s truly fascinating to watch as Brannaman skillfully runs through his seminars, guiding both humans and horses with seemingly common-sense advice. Part of Brannaman’s charm is his straightforward, almost philosophical, way with words that make the whole process of horse training look and sound way too easy.

In fact, the climax of the film is when a violent young colt, that is assumed to have been oxygen deprived at birth, is brought to one of Brannaman’s seminars in what is the first real example of conflict between horse and “whisperer.” Even then, Brannaman manages to calm the horse enough to get it in its trailer even after it has already hurt another individual and attacked others.

Even the most mundane scenes in Buck, generally those not involving horses, are entertaining to watch because of the subject’s humble wit and captivating background. Brannaman displays his rope skills in one scene, a skill he seems to have passed on to his daughter, and Robert Redford appears in the film giving some behind-the-scenes credence to Brannaman’s influence on The Horse Whisperer.

Buck is surprisingly Cindy Meehl’s first film and is put together wonderfully, with beautiful cinematography and an excellent soundtrack to go along with it. Meehl chose a captivating subject in Brannaman, and the film will end up whispering more than a few positive thoughts the audience’s way.