Queen of the Sun: What Are the Bees Telling Us? 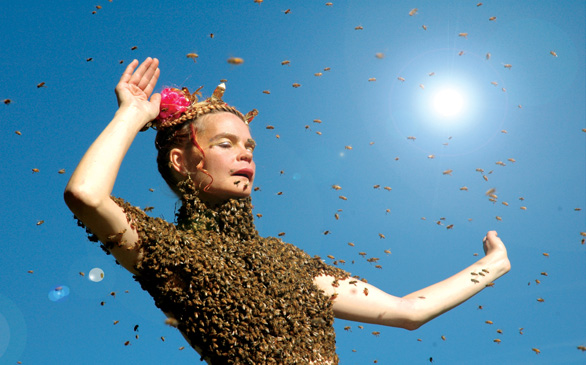 “Great rascals of venom! It’s a beard of bees!” screams the second shot of Queen of the Sun: What Are the Bees Telling Us?, the newest documentary from director Taggart Siegel. The shot is zoomed-in, up close next to a woman’s skin that’s fair and bright white against the sunlit sky, and coated in a layer of … live bees! They swarm in a tangle cooled by the solace of the bee-lady’s presence, a strange shelter to prove the point this film is in a frenzy to make: Hey, you, don’t tell bees to buzz off!

“They’re cool,” the bee bedecked lady might say, “we can cohabit this earth together, totally.” It’s a new age circus act out of time, but still an impressive spectacle. (Can you wear a jacket and beard of bees?)

That is the last we see of the bee woman, and the film proceeds forth with ultra-bright, ultra-crisp digital imagery as it explores the history of bees in our flora filled world. The handheld camera (also manned by Siegel) dives into the pollen-dusted center of a sunflower. The golden petals mark a tremendous contrast with the blue sky surrounding it; and you can see the texture of the soft flower, the miniscule body parts of the bee at its center. This could very well be a glossy demo shot for a color printer ad.

But while the sparkling digital style of Queen of the Sun is simply rapturous, the content is less so. The film is an exploration on the role of bees and beekeeping in modern society, and the history both have had on our planet. Which, with the long slate of beekeepers, organic farmers, entomologists and biologists speaking on record, suffice it to say that role is integral to our survival.

“Pollen is, so to speak, materialized life,” says molecular biologist Johannes Wirz, one of Queen’s characters. Without it and without bees spreading it about, the natural world would simply collapse. Didactic, yes. Dire consequences, absolutely.

Before the world ends, it’s worth noting Siegel’s previous feature, The Real Dirt on Farmer John (2005), about an organic farmer in rural Illinois who is gay and ostracized from his community because of it. At the center of that film is an affable, colorful character who brought vitality to the screen. Farmer John (whose Real Dirt I recommend you check out) was the focal point of a cause: organic farming and community building.

The sweet affection and humor of this central character is replaced in Queen of the Sun with a slate of specialists who merely relay facts. It’s a cooled elixir that’s less palatable, but certainly informational, and despite Queen’s grave prognosis there is an upbeat conclusion. And thus the message of our times: Respect nature, green is the new black, buy organic, buy organic and always buy organic. Moreover, respect the bee. Yellow jackets are always in season. The bee lady could have told you that.

Queen of the Sun: What Are the Bees Telling Us? releases in select theaters June 17.