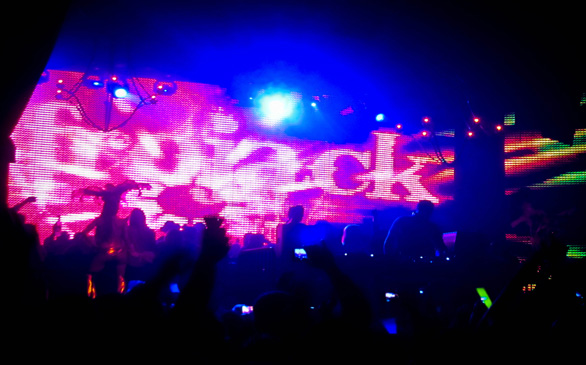 Right now, electronic dance music is dominating the radio waves and nightclubs, and one of the key individuals leading the genre’s crossover to the mainstream is Afrojack. The 23-year-old Dutch producer/DJ has been performing for sold-out crowds all over the world (including a very memorable set at Coachella) and producing some of music’s current hits (Pitbull’s “Give Me Everything,” Chris Brown’s “Look at Me Now”).

His recent stop at the Music Box left fans in awe. The sold-out venue was jam packed with revelers who were prepared for a ridiculous night. Afrojack took the stage around 11:30 p.m., and commenced with a pretty rhetorical question for the raucous crowd: “You guys ready for a crazy, fuckin’ night?” He then dropped “Bangduck,” and chaos ensued.

The Dutchman has an extensive catalogue of hits, as every track played garnered a roar of approval. One of his most popular, “Take Over Control,” got the crowd singing along with every word. He mixed in Martin Solveig’s “Hello” with his remix of “Pon de Floor” which got everybody hyped, with the help of the fog cannons.

Towards the middle of the set, he announced that he had a special guest in the house. He cued up “OMG,” and Usher appeared on the DJ stage to the crowd’s surprise. Afrojack continued to play some of Usher’s more electro inspired songs as the singer posed for the plethora of cameras.

The DJ had the crowd in the palm of his hand, as he could drop a slow jam and still have the place go bonkers. The show was epically awesome, and it was one worthy enough to gloat to all your jealous friends who couldn’t attend.