Maria Taylor: Not One to Overlook 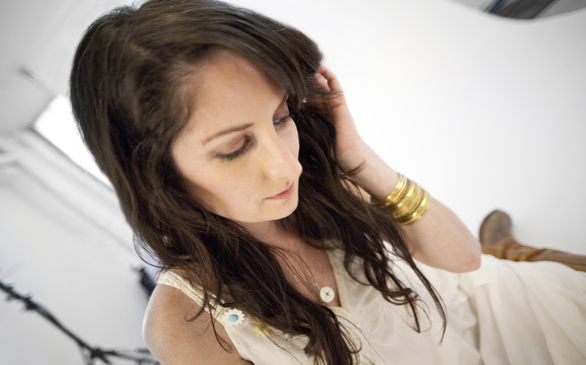 It’s Dec. 1, 2010. Maria Taylor has just finished one leg of the recently reunited Azure Ray tour and finds herself living in her childhood bedroom. It has been over a year since she moved back to her hometown of Birmingham, Ala., and she hasn’t written a song since the move.

“I was kind of scared that I was never going to write a song again,” says Taylor. “And I was thinking, maybe the move to Birmingham wasn’t a good idea because I wasn’t even sure why I did it. I was living in Los Angeles and I loved it, but something told me it was time to go back to Birmingham.”

Being inside of her old home located on Overlook Road, Taylor locked herself inside her room and found inspiration in asking herself the big question: Where is my life going?

Her writer’s block was officially over. Taylor spent two weeks hunched over her computer, singing licks, playing guitar and recording drums in her basement. After all nine songs had been written, she moved straight into the studio to polish them up. Seven days later, her fourth solo album (and her first self-produced venture) was completed and fittingly named Overlook.

“The songs aren’t so much retrospective on this record. It’s a little more like looking ahead, just kind of asking questions about the future and not really coming up with the answers,” she shares.

Taylor says that writing songs in her hometown had an influence on the tone of the album as well.

“It’s definitely got some southern influences, it’s more guitar driven and there’s more elements of rock ... I tried to use a lot of my friends and family to play on the record. They added so much and contributed to the direction that it went.”

Her talent for song lyrics may be described as prolific, and their creation certainly was for her in some cases.

“A lot of the times when I write songs I feel like they’re kind of foreshadowing something that hasn’t happened yet. I do that a lot, and it kind of freaks me out sometimes. ‘Along for the Ride’ might be one of those songs. I was listening to that song the other day, and I got chills.”

Another technique that contributes to Taylor’s sound is her ability to play guitar without the high-E string. She doesn’t like the treble-y sound.

“It actually makes it harder to play, and there are some chords I can’t play because I don’t have that string. But that’s why I have another guitar player on stage with me, so he can play those chords,” she jokes.

She is currently on tour with Jason Isbell and the 400 Unit. What makes this tour so special is that for the first time, her backing band is made up entirely of her family. Her sister Kate is on drums, while her brother Macey plays bass and banjo.

On what it has been like touring with her relatives Taylor says, “We get along really well, so it’s just been a great family vacation.”

Playing music as a family is something that the Taylor children grew up on. This may have something to do with the fact that their father was popular for writing jingles and built a home studio in the basement. They would often get together, grab an instrument and play along with him. Taylor is a bit older than her siblings, so she had to wait a bit before she could bring them on tour with her.

“As soon as they turned 18, I swiped them up and took them on the road and showed them what debauchery looks like,” she says.

What’s great about Taylor is how open and down to earth she is. She still lives with roommates, is saving up to buy a house in Los Angeles and waits in line to pump gas, just like everyone else. To learn more about her lifestyle, just listen to “Bad Idea,” which is a literal translation of it.

“It’s just kind of asking if it’s a bad idea to be 35 and still be living like a 20-something, sleeping all day and being messy and staying up all night,” says Taylor. “That one’s really fun to play live.”