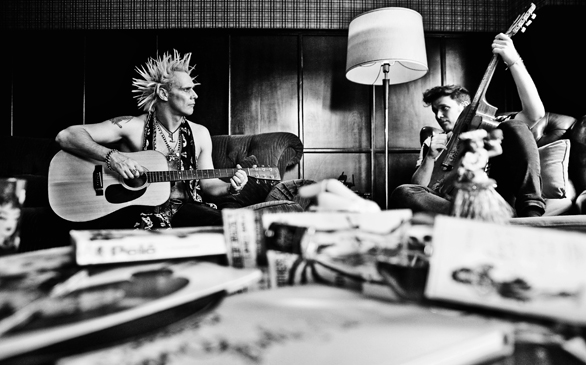 It’s probably safe to say that you’ve never heard anything like Brothers of Brazil before. For the past three years, the brotherly duo of Supla and Joao have been making some of the most original songs around by combining elements of traditional Brazilian music such as bossa nova and samba with rock and funk to create a unique sound that has won over countless fans in their home base of South America.

Now SideOneDummy has readied the band’s first American release, and the self-titled Brothers of Brazil drops on July 26. In the meantime, the guys are previewing the release at shows all over town throughout June; catch them at the Hotel Café on the 27th or visit sideonedummy.com/brothersofbrazil for a list of other area dates.

The Red Button: As Far As Yesterday Goes

The music of L.A. pop duo the Red Button is noted for having a warm and sunny feeling to it, so much so that the guys (Seth Swirsky and Mike Ruekberg) have decided that June 21, the first day of summer, is a perfect time to release their latest, As Far As Yesterday Goes. But Swirsky says that outlook is a bit deceptive since As Far As Yesterday Goes also features world-weary lyrics set to those bouncy melodies.

“I like the fact that not everything is just happy and perfect all the time,” the singer says. “The catchy melodies inspire people to sing immediately before they realize there’s a dark and light thing happening.”

Ruekberg adds that the album is a little Beatlesque while also generally giving a nod to the golden age of singer-songwriter-driven pop/rock; “This time we’ve leapt boldly into the ’70s!” theredbutton.net.

In the decade that they’ve been putting out records, Puddle of Mudd has sold over six million albums and collected nine Top 20 rock hits, seven of which went to No. 1, so it’s pretty safe to say the band knows a little something about hit singles. Still it must have been hard for them to decide which artists to honor on their upcoming all-covers album re:(disc)overed.

Every band member submitted a list of potential cuts that eventually got whittled down to eleven tracks including takes on AC/DC’s “TNT,” Led Zeppelin’s “D’yer Maker,” Elton John’s “Rocket Man,” Steve Miller’s “The Joker” and the Stevie Nicks/Tom Petty duet “Stop Draggin’ My Heart Around” where BC Jean handles Nicks’ vocal part.

“This record was a lot of fun to make,” comments lead guitarist Paul Phillips. “They were all songs and bands that we have been a fan or fans of forever. We chose some that may be unexpected to some just so we could push the Puddle envelope a bit.”

Several of the biggest names in today’s current drum industry have announced a search for the Drummer of Tomorrow. Drummers can film a solo or play-along performance, upload their video to drummeroftomorrow.com and be entered to win over $50,000 in prizes and drum gear. Prizes include drum sets from Mapex, Zildjian cymbals, drumheads from Remo, sticks from Vic Firth and songbooks from Alfred Music Publishing.

In addition, the top winner will win an artist endorsement contract from Mapex Drums and will appear on the company’s official artist roster. Elimination rounds will progress all the way into 2012 and as winners advance through the contest they will be flown to various locales to perform, possibly including a Nashville studio, the winter NAMM show in Anaheim and the 2012 Musikmesse show in Germany. Entries will be accepted through July 31.

(John) Maus in the House

Former Cal Arts student John Maus has readied a new release called We Must Become the Pitiless Censors of Ourselves. The much raved-about Maus includes his first ever duet on the album, “Hey Moon” performed with the song’s writer, Swedish singer Molly Nilsson. Another surprise on Pitiless Censors is “Cop Killer;” this isn’t the controversial 1992 protest song, but Body Count’s original was the inspiration for Maus’ song. Pitiless Censors drops on June 28, and Maus will play a co-headlining show with Puro Instinct at the Echo July 15.