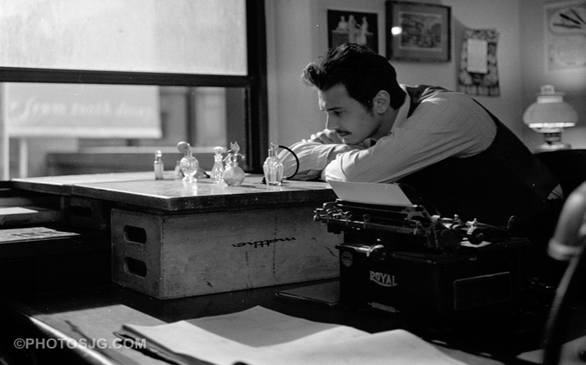 James Franco will be on hand to present a The Broken Tower screening at L.A. Film Festival.
(Credit: ©PHOTOSJG.COM)

Lately, I’ve been finding myself in conversations with out-of-state transplants about their opinions of Los Angeles. The words “weird,” “crazy” and “fake” come up a lot, and as someone who spent her formative years narrowing down the best whole-in-the-wall Mexican drive-thru’s in town (a grimy exterior is usually a good sign), enjoying sunny winter days and meeting interesting people from elsewhere in the country or even the world, it has been increasingly difficult to keep smiling during these talks.

Like any other city, Los Angeles isn’t perfect. You spend a lot of time driving. You spend even more looking for parking. Then, the nice attendants in the lot will ask you for your money. You will see tanned, bleach blond, thin women with disproportionately sized breasts. Not that there’s anything wrong with that, but I guess that’s where someone might come up with the word “artificial.” With this and other kinds of what can be construed as superficialities, people are not as direct with each other – but that doesn’t mean that deep down they are all vicious liars. Maybe they are just being polite.

Synonymous with Los Angeles, the film industry lately has been accused of being fake, in the sense of unoriginality and being too sexualized or too reliant upon all the special effects that a production company can afford. Lower-budget movies, no matter how good they are, aren’t as likely to be noticed and exposed to the world. This is where the Los Angeles Film Festival comes in. In talking about big Hollywood and smaller independent movies, associate director of programming Doug Jones says, “For every big time director, there’s a scrappy young filmmaker who’s just getting started here in Los Angeles. The festival gives us a chance to bring [them] together.”

Produced by the Film Independent and presented by the Los Angeles Times, this year the festival will bring to downtown Los Angeles a curated set of the best of the 5,025 submissions from filmmakers around the world. Here are five of the many things to look forward to in the festival:

1) The festival’s international spotlight will focus on Cuba, showcasing screenings of Habana Eva, Operation Peter Pan: Flying Back to Cuba, Suite Habana and Ticket to Paradise. Sponsored by the Department of Cultural Affairs and the UCLA Latin American institute, these four films will satisfy your fix for culturally diverse entertainment that Los Angeles nurtures in its residents.

2) How to Cheat is L.A.-based actor and filmmaker Amber Sealey’s entry to the festival’s narrative competition. It will surprise you with nudity that isn’t without purpose and touch you with a creeping, too-real picture of life, all while making you laugh with wry, dark humor.

3) Entrance is Dallas Hallam and Patrick Horvath’s thriller about a woman who leads an aimless and unhappy life in Los Angeles. The film begins by lulling the audience into a seemingly mundane and depressing life, and then it sneaks upon you with open-mouthed fear and paranoia. Walking the streets of Los Angeles won’t be quite the same after the last disturbing scene, which will stay in your head beyond the end credits.

4) Before NYU, the Ivy League and what could be an increasingly problematic dependence on achievement, James Franco once upon a time graced the halls of UCLA for his undergraduate degree in English and creative writing. At An Evening with James Franco, you’ll get to see the actor, writer and filmmaker to present one his latest ventures: an experimental biopic of poet Hart Crane titled The Broken Tower.

5) Guillermo Del Toro’s Don’t Be Afraid of the Dark is a Hollywood remake starring Katie Holmes and Guy Pearce that will screen on the festival’s closing night. The film’s frightening trailer has been making the rounds in movie previews, and the festival will give you a chance to see the movie before its Aug. 26 release date.

The Los Angeles Film Festival is a celebration of both the city and the movie industry. Who said that the extravagantly beautiful and the inspiring but grimy can’t exist in the same city? Despite some insanely budgeted special effects, there is an authenticity to be found at the core of passion and talent. Los Angeles may be “weird” or “fake” to some, but only to those who haven’t gone and experienced all of it. Besides, what’s wrong with a little crazy mixed with the nitty-gritty?