The Sky is "Falling": Connor Jessup battles aliens on his summer vacation. 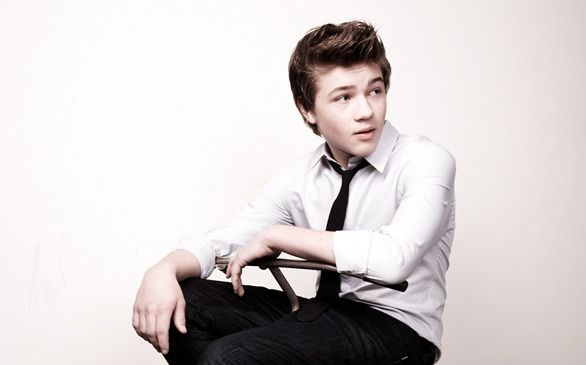 If your home is about to be blown to smithereens by a fleet of alien invaders, what’s the first thing you would grab before escaping with the rest of your family? Your prized laptop? Some photo albums? A camera to capture all the action?

The first thing Connor Jessup would grab: a stack of his favorite books.

“If I was being practical,” he second-guesses, “I’d probably want to bring some sort of survival kit.”

“If we didn’t have power,” he further explains.

How admirable … and surprising. A 16-year-old who loves to read?

“If we did [have power] I’d bring my favorite movies.”

Such rationalizations had to be made while preparing for his role in TNT’s new sci-fi series, “Falling Skies,” one of my picks for the season (as seen in last month’s “Summer TV Preview”). The young, Toronto-based Jessup plays Ben Mason, the kidnapped middle son of a historian played by former “ER” doc Noah Wyle (“one of the nicest guys I’ve ever met, incredibly kind and intelligent”). The elder Mason leads a human resistance movement against a group of hostile E.T.s that look nothing like the celestial entity Katy Perry serenades in the music video for her ode to otherworldly beings.

The show is also a far cry from Jessup’s days on “The Saddle Club,” a hit Australian-Canadian kid series about the trials and tribulations of a group of equestrian competitors. Sharing screen time with a bunch of girls and horses is great and all, but dodging death rays shot by creatures from outer space is an entirely different thing.

The FX-heavy pilot for “Skies” was shot in the fall of 2009, back when it was known as the Untitled Steven Spielberg Alien Invasion Pilot “which is a pretty awesome title for a pilot,” says Connor. “It can’t really get any much better than that.”

Having been added to the cast halfway through production, he couldn’t believe he was getting the chance to work on a project so massive. As a child, his parents, avid film buffs, raised him on the likes of Jaws, Close Encounters of the Third Kind and The Wizard of Oz.

“I’d watch the Batman movies for weeks in a row,” he says.

Now, his DVD shelf is full of his favorites like Lost in Translation, Magnolia, Network and Raging Bull – an indicator of his matured taste in cinema. Oh, and now he gets to work for the guy who directed Jurassic Park on a project written by the guy who penned Saving Private Ryan (that’d be Robert Rodat). It has been an amazing experience worthy of several pinch-me moments I’m sure he’s had.

“To have someone say ‘Steven loved your tape’ is like a dream come true,” he tells me in awe, describing the time he had to re-audition for the role last summer when changes were made to his character.

When he got the part – again – he had to brush up on his American history and study the American Revolution in order to grasp the parallels made apparent in the series. As for those changes in the script regarding his character, his lips are sealed … Let’s just say he plays a pivotal role in why the aliens are abducting teenagers during their attempts to wipe out humanity.

Jessup appears to be very humble and appreciative of all that has happened thus far. After all, there are only a handful of actors who can be considered having been “discovered” by the iconic auteur. Christian Bale in 1987’s Empire of the Sun comes to mind, another epic tale in which a young boy is separated from his parents during wartime.

For now, Jessup is enjoying the ride, having started the whole professional-actor thing when he was an 11-year-old theater geek (waaay back in 2006). His mom eventually helped him find an agent, and it has been a life of film shoots and on-set tutors ever since. Luckily, he also attends a Toronto high school that’s kid-performer-friendly.

And there seems to be no lull in his career anytime soon. In between running away from CGI aliens and hanging out with Wyle off set (“We play chess.”), the talented Mr. Jessup is concentrating on producing and directing his own short films, wrapping up on the Canadian indie, Blackbird, and of course, finishing school – which can be a challenge: “Sometimes it’s hard to focus on schoolwork when there’s a car blowing up nearby on set.”