Pay the Piper: “Covert Affairs” star does what it takes to get ahead 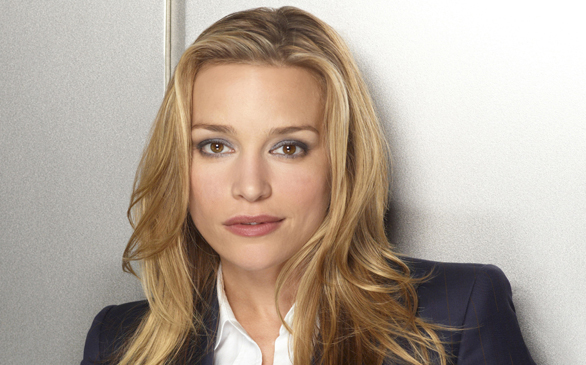 Not much frightens actress Piper Perabo. She’s not afraid of auditions, or a roomful of strangers or hauling off to New York fresh out of college with only a coffee pot, a cluster of books and a gym bag of clothes. What does scare her is doing mediocre work, she confides in the garden cafe at the Chateau Marmont Hotel. While she doesn’t claim to be a perfectionist, she quit her burgeoning career for two years to work on her acting. That kind of dedication makes her ideal for the role of the CIA agent Annie Walker in USA’s “Covert Affairs.” Annie’s fluent in 12 languages and can out fox the most fearless of foes, her brain as fleet as her feet.

“I’d done a movie and wasn’t particularly happy with the work I’d done so I was kind of down about it,” she says, fresh from an early morning swim, her hair pulled back in a short ponytail, still wet from the shower. “So I spoke to a bunch of different actors and asked them who they had studied with in New York, and the same name kept coming up [Maggie Flannigan].”

Perabo, who grew up in New Jersey, enrolled in the class that follows the method of the legendary teacher Sanford Meisner.

She ejected her old way of working and started over from the beginning. “And the combination of the experience and cleaning of the slate and rebuilding my process really changed my work,” she says.

To this day she not only worries about maintaining a peak performance but about everything else. She had a playwriting teacher in college who taught her how to cope with her tendency to fret the details. In his play he had his protagonist arrive in a steamship. But he didn’t know how to manage a steamship on a stage.

“So he went to the artistic director and said. I ‘want to write this scene but I don’t know how to do it.’ The artistic director said, ‘You’re the writer. You just write, “Enter, steamship,” and we’ll take it from there.’ “I think about that a lot,” she says, leaning forward. “As an actor I have to remind myself sometimes, ‘Don’t worry about realistically HOW are we going to do this? You just think, ‘Enter, steamship.’ Your responsibility is the imaginary world. And that story really stuck with me. If you’re doing a scene where you get shot, or someone dies, your responsibility is just the truth of that moment. You don’t have to worry about the other stuff,” she shrugs her shoulders, which are bare in a navy-blue, sleeveless sheath. “If you’re a practical person you can get wrapped up in ‘How much time is left in the day? And, ‘How are we going to shoot this?’ And, ‘Can you see me if I move like this?’ But really your responsibility is just to live out that moment. And there’s all kinds of people around you to figure the rest out.”

She is so devoted to the moment that she broke her leg executing a stunt on the finale of the first season of “Covert Affairs.” They placed a pin near her knee while she healed and then went back in to remove it. Today just a small red trail on the outside of her left knee testifies to that ordeal.

Perabo, 34, who costarred in the films Coyote Ugly, Cheaper by the Dozen and The Prestige, thinks she always wanted to perform. She and her two brothers would act out on her grandmother’s sun porch making folding doors and heavy curtains into an imaginary stage. Working her way through college, she washed dishes, sold purses at Macy’s, answered questions at an information booth and installed music boxes in jewelry cases. Later she waitressed and served cocktails, but was not very good at either, she says. Unmarried, she doesn’t like to talk about her personal life, but will say she wouldn’t be opposed to marrying someday. And she has no rules about dating actors or falling in love.

“You know when you know,” she says. “Sometimes you know when you see somebody and other times you’ve known someone for 10 years and you think, ‘Oh, duh, why didn’t I look at YOU?” I’m totally open to all. It’s just the way that the cards start falling, you really make sense together.”