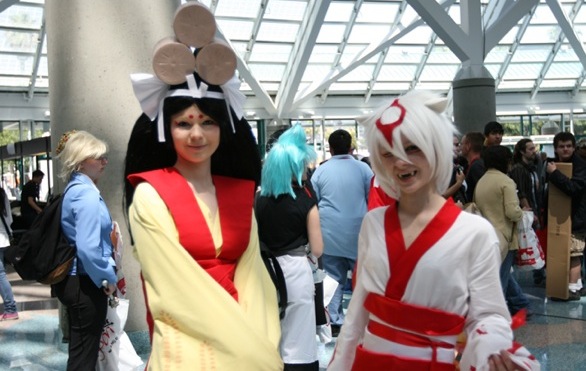 Admiring all of the cosplayers is a fun part of Anime Expo.
(Credit: A.J. Grier)

The first weekend of July brings us another visit from the arts of the Far East. The Los Angeles Convention Center welcomes Anime Expo over the Fourth of July weekend to showcase all that is hot in the anime. With this being the 20th anniversary of the expo, there are really special guests making appearances this year.

One of the most highly anticipated guest events is a performance by Hatsune Miku. Miku isn’t actually real, but that hasn’t stopped her from being a huge hit in Japan. She’s a holographic performer with a synthesized voice. Think Britney Spears, if Spears were always CGI on stage instead of just in her videos. I’m thinking Miku’s show will be much like a Gorillaz show but without any live players performing in silhouette behind the projected cartoon band. I’m honestly not sure how they’re going to pull it off, but it will be something very special indeed.

Danny Choo will also be making a return appearance this year, and I’m pretty excited about that as well. Though his popularity as the dancing “Tokyo Stormtrooper” in the streets of Japan has gotten him a lot of media attention, his Web site Culture Japan (dannychoo.com) which chronicles his experiences in and around Japan is quite fun and interesting to visit.

Those may be a couple of specific highlights of AX2011, but by no means are they the only reasons for going. The industry takes this expo very seriously as an outlet to communicate directly with the fans, and as a result, every major distributor, production company and oftentimes talent (yes, the voice-acting stars) make an appearance to not only tell you of upcoming projects but also answer any questions you may have concerning your favorite anime and manga.

I could list all of the companies that will be there and how you may know them ... well, actually I couldn’t, there isn’t enough room to fit them all. Let’s just say if you’re thinking of any cartoon from Japan, the company that made it will be at AX to speak to the public. Yes, even some Power Rangers will be there (for real!).

The festivities aren’t just about the industry. The expo is also about the fans, and there will be several opportunities to showcase any talents you have and possibly win some prizes for being so good. There is a singing competition called AX Idol, a battle of the bands competition, an anime music video contest and the ever-popular Masquerade. The Masquerade is a competition the allows cosplayers to fully explore their creativity with their costumes, and many take the opportunity to put on skits and dress in the most elaborate costumes with some really amazing results.

There are also smaller events such as Anime Singled Out (like the old MTV dating show but with anime), an Anime Trivia Show, anime Last Comic Standing, a console gaming room, a table top gaming room, a dance, a model contest, a scavenger hunt and, of course, karaoke. So yes, there’s plenty to do. Basically, if it’s fun, you can do it here with anime.

This will be my third year attending AX, and it’s always a lot of fun to walk around and see cosplayers or attend the many panels and focus groups to find out what’s going on with some of my favorite series and heading down to the Nokia Theatre to check out a concert or two. Being at the Convention Center is great because it’s just a short walk to L.A. Live and many places to eat. Around lunchtime, several food trucks also show up with a variety of options. AX2011 makes for a great experience for one day or all four, especially if you’re curious about anime.