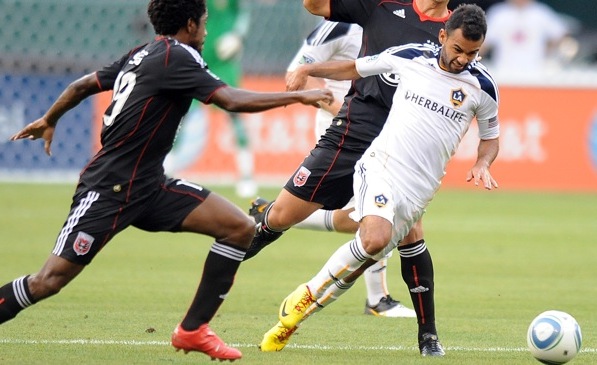 Juninho's goal gave the Galaxy the edge.
(Credit: Chuck Myers/MCT)
With three scores and a stingy defense in their 3-1 victory, the Los Angeles Galaxy’s visit to Colorado was not a pleasant one for the Rapids. The defending MLS Cup Champions could not do anything to overcome the Galaxy defense.

“Our thing today was to keep with them and drop them a lot early and not let many balls behind us because we knew that they were going to target their big men and knock balls down,” Galaxy defender Omar Gonzalez states to mls.com. “I think that we did a great job managing that.”

Los Angeles’ win comes at a crucial time, since they had not won their past two games. The Galaxy are now 9-2-7 overall with 34 points, sole possession of first place in the Western Conference and the best mark in MLS.

Additionally, the Galaxy improved their unbeaten streak to nine games, a tie for the longest streak so far this season. Interestingly enough, the Rapids are the other squad who had a nine-game unbeaten streak, but theirs was snapped with the defeat.

In the 25th minute of play, the Galaxy earned an own goal to capture a 1-0 lead, and it eventually came for good. Brazilian midfielder Juninho netted his third season goal in the 42nd minute to give the Galaxy a 2-0 edge by halftime.

Los Angeles continues its brief two-match road trip, making a stop in Northern California for a game against the San Jose Earthquakes on Saturday, June 25, at 3:30 p.m.