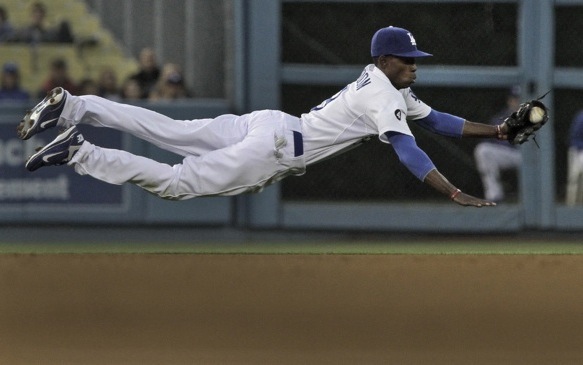 Rookie shortstop Dee Gordon is fast, graceful and plays with eager determination.
(Credit: Lawrence K. Ho/Los Angeles Times/MCT)
In recent weeks, rookie shortstop Dee Gordon has been one of the main subjects of conversation in Dodgertown. After a scattershot of injuries took out three starting infielders, there was suddenly a spot for the 22-year-old “shortstop of the future.” For a couple years now, he has been called such, but it was hard to believe it.

At first glance, Dee Gordon does not look like a big leaguer. He has narrow shoulders and a light frame. His uniform droops off him, and his cap looks like it’s about to swallow his head. Somebody feed this kid, you think.

But to see the gangly Gordon in action is another story. He’s fast, graceful and plays the game with an eager, restless determination – sometimes too eager. Against the Reds last week, he tried breaking early from his lead off first base on a left-handed pitcher and was promptly picked off. Against the Astros over the weekend, Gordon threw side arm to first base on a routine play in which he had plenty of time. The ball took several bounces to first, and the runner was safe.

Such rookie bumbles may be dismissed as freshman jitters. In these dark days of Dodger mediocrity, any story that offers hope is enthusiastically greeted. Gordon represents a possible future, a time when the team is fresh and exciting again; in other words, he represents a fantasy. The dismal recent performance of the team, which has them 8 games under .500 (through Sunday), makes for a grim present, and the near future doesn’t look very bright either. By all reports, owner Frank McCourt doesn’t have the cash to meet payroll at the end of this month.

If you go to a game these days, be sure to invite a lot of imaginary friends. There are plenty of seats, and they don’t have to buy a ticket. Last Wednesday, I took my girlfriend (a real one), father and a crew of imaginary pals to Dodger Stadium to watch the Dodgers get creamed by a score of 7-2 at the hands of the Cincinnati Reds. The loss completed a three-game sweep. The game was virtually over by the third inning as the Reds were already up five runs. But still, it was beautiful: a warm June afternoon to contemplate the old pastime.

It was about the seventh inning when I spotted a bald man with a ring of grey hair working the crowd about 10 rows below us. Upon closer inspection, I realized it was Dodgers vice chairman Steve Soboroff, the famous L.A. developer and one-time mayoral candidate.

When he walked past us someone called out, “Hey, Steve, when are you gonna sell the team?”

To my astonishment, Soboroff turned towards me, sat down in the seat next to mine and asked, “Do you really think that’s what needs to happen? You think that will bring the fans back?”

Recovering from my shock and collecting my thoughts, I presented my own citizen’s opinion.

Soboroff replied, “OK, but who are you gonna get that would be better? You think a wife-beater like Steve Garvey would do better?”

He went on: “Sure McCourt has done obnoxious things. This is L.A. Who hasn’t? If you threw out every obnoxious person, half the city would be empty overnight.”

Wow, I had never heard such candor from a politician, let alone before my very eyes. Soboroff, a moderate Republican who ran for mayor 10 years ago, is known for promoting the housing development Playa Vista on former wetlands. Reviled by certain environmentalists, he has nevertheless made a reputation for himself as a champion of the city. Throughout the trials of McCourt, Soboroff has been a steadfast ally of the embattled owner, probably no coincidence then that he was hired as vice chairman with the purpose of improving community relations.

To be in that stadium and feel the vacancy of so many empty seats, Soboroff certainly has a big job on his hands. But I give the man credit for doing it. As he worked the crowd, he seemed genuinely interested in the thoughts and opinions of the fans. What’s more, he gave signs of agreeing with them. I left thinking perhaps there IS a voice of reason reporting to the owner. Then again, perhaps not.