Davina and the Vagabonds: Black Cloud 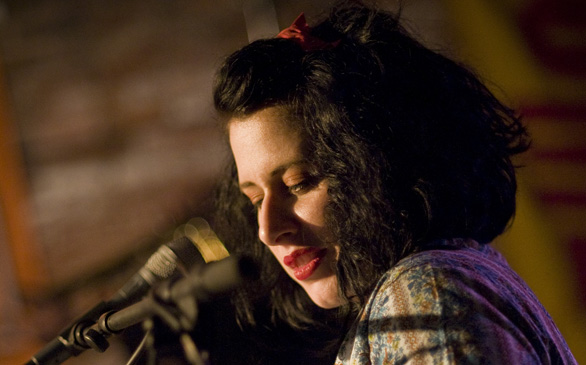 This album starts and ends with a New Orleans-style let-the-good-times-roll instrumental called “Vagabond Stomp,” and the intro portion is probably in place so that listeners know right away that Black Cloud is not actually mired in depression. No, the only storm here is a tempest of fun, even though title track “Black Cloud” – done in a Vaudeville style with bawdy horn accompaniment – finds singer Davina Sowers moaning out raspy blues about how things aren’t going the greatest at the moment.

Darren Sterud’s trombone playing and Dan Eikmeier’s trumpet work play a substantial role in shaping the sound of Black Cloud, but it is Sowers’ voice that is the draw here. On slower numbers like “Sugar Moon” Sowers sounds a bit like Martha Davis, late of the Motels, although the Vagabonds work in a much earthier vein. The earthier the better, as a matter of fact; Sowers is at her best when she’s feeling sassy as she is on the swinging “Start Runnin’” where she issues a no-holds-barred warning to a perceived rival who’s trying to steal her man. It’s one thing to bring life to a colorful character, but Sowers exudes a consistent confidence that’s so palpable that, when the band’s not blowing like crazy, you want to hang on every syllable.