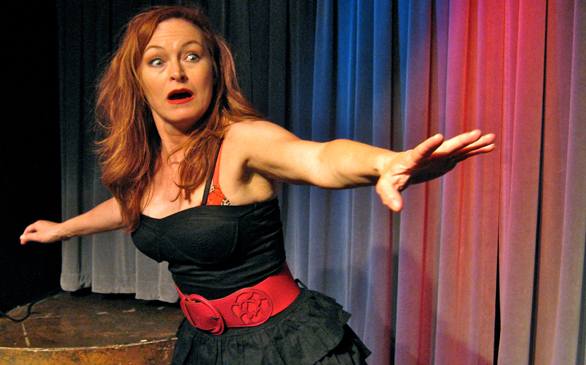 Clara is no stranger to failure. In “Apocalypse, Not Now!,” Clara, an agoraphobic living in Tujunga since 9/11, is forced to face her fear when a fire threatens to destroy her home left with no choice but to bond with her neighbors and enjoy their last minutes before the world ends.

Now this is what you’ll expect from reading the synopsis. What you get is something completely irrelevant, mundane and – for lack of a better word – dull play. Maybe I’m being too hard here, but nobody wants to go to a one-person show to hear her complain.

Clara begins telling the story of her life until that point: She is recently divorced for a second time, having a meltdown after being called “unlovable” and feeling isolated from the rest of the world. On numerous occasions, the play takes a lot of different directions, during which you find yourself wondering what the overall point of the play is. First, she’s going on about her odd job being a hand model, the next she’s obsessed with Jason from Home Depot who has Tourette’s. There were moments when I couldn’t help but laugh; yet most often, I would wonder what was so funny. Had I missed something here? Too many so-called jokes and the occasional whimsical remark only came off as bitter. With an over-the-top performance by Clara York, “Apocalypse, Not Now!” is basically much ado about nothing.