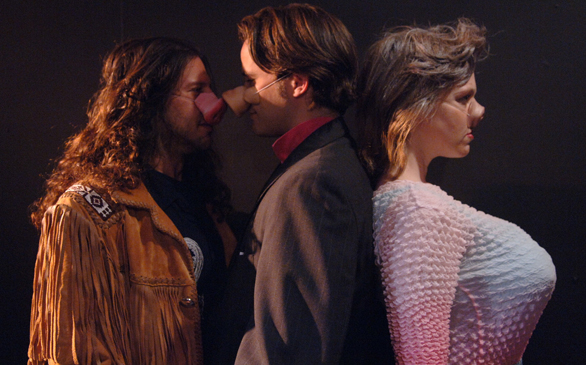 Never has waiting for death been so fun. Fun for us to watch, that is. Making its debut at this year’s Hollywood Fringe Festival on June 11, “Barking Pig” is dark comedy at its best.

When six patrons of the Barking Pig, a shabby bar on the outskirts of nowhere, receive news that Victor Helms, whose frightening reputation proceeds him, has just escaped out of prison and is coming to kill one of them, believe me, the only question isn’t just “Which piggy will die?” Seeing as they are practically staring death in the face, they decide to dig and try to scrape the surface of life’s final mysteries – always with enough time to ask: Is there time for one more drink?

Not only is “Barking Pig” an ingenious play, but its diverse characters – which include a crooked lawyer, a bouncer, the town’s constable, a hippy pickpocket, a punk music teacher and a dumb witted broad – are engaging and perversely hilarious.

The writing is both witty and easy flowing in a way that it hooks you immediately. One minute everyone is arguing, the next they are victims of their own fears and desires. Each secret revealed heightens the tension, as our question is slowly being stripped apart. What have they done to cause Victor to go on a violent rampage?

The play moves at a steady pace that combines amusement, tension and mystery with music and bad poetry. With some unexpectedly wonderful twists and some what-the-hell moments, “Barking Pig” is a play not to be missed.