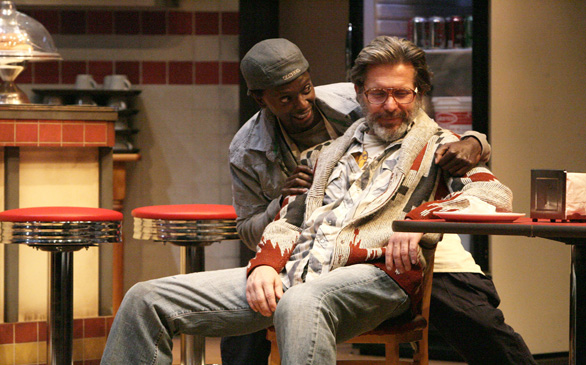 Arthur Przybyszewski (Gary Cole, Office Space) is the owner of a donut shop he inherited from his Polish parents. We quickly learn that Arthur is going through tough times. His donut shop was broken into, his ex-wife recently died, he hasn’t had any communication with his 19-year-old daughter for a few years and he has lost his desire to keep his donut shop open. His Russian neighbor, Max Tarasov (Ron Bottitta), looks out for Arthur with intentions of purchasing the donut shop from him. One day, a young African-American kid, Franco Wicks (Edi Gathegi), stops by the shop looking for work. Franco is an aspiring writer who has fallen into some serious debt with the mob. From that point forward, a hilarious, unlikely, beautiful friendship ensues.

The details of set designers John Arnone’s stage, from the donut platter sitting on the counter to the metal cream dispensers on the tabletops made the experience very real and familiar. I felt more like a customer of that donut shop eavesdropping on the characters than part of an audience in a theater. This performance is a gem. Regretfully, we do not experience theater of this caliber in Los Angeles as often as we should. I cannot recommend it ?enough.