Bad Teacher: School’s in for summer. 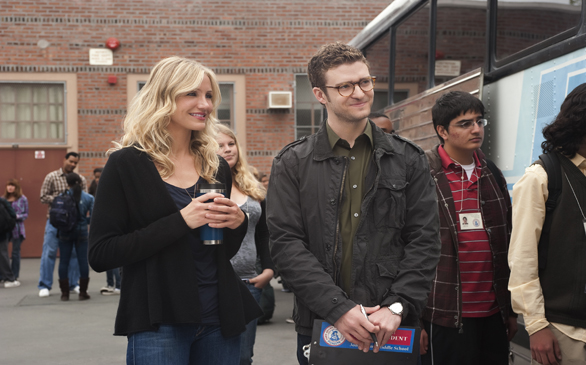 “Bye, Bye, Bye.” That was the title of one of the biggest hits by one of the biggest boy bands of all time, *NSYNC. That phrase is also what many boy band members can say to their careers after they graduate into manhood. Of course, there are the lucky few who can escape the boy band purgatory, and Justin Timberlake is definitely one of those lucky few. He went on to top the charts as a solo artist with “Rock Your Body” and by bringing “SexyBack.” He also parlayed his charisma into memorable appearances on “Saturday Night Live.” Who can forget his “Single Ladies” video with Beyoncé or the memorable sketch with Andy Samberg when they gave their girlfriends some unexpected surprises in boxes? His season finalé hosting gig this year (along with some help by Lady Gaga) gave “SNL” some of its best ratings in recent memory. After hosting “SNL” four times, he moved into rarified air with such heavyweights as Alec Baldwin, Tom Hanks and Steve Martin. It was only a matter of time until he translated his small screen success to the big screen, and he admits as much.

“It seems like more than four times because when I’m in New York, they can’t keep me out of ‘30 Rock.’ I grew up with ‘SNL.’ It’s part of the humor and chemistry between me and my father. I watched it with my father when I was young, and it’s something that’s special to me. I’m such a huge fan of the show, and to be honest, I’m here [at the Bad Teacher junket] because of ‘SNL.’ I have no doubt in my mind about that.”

He started out with some well-received roles in smaller movies like Alpha Dog and voiceover work in the Shrek films before garnering praise in The Social Network. His latest role is one of the leads in the upcoming Bad Teacher costarring Cameron Diaz and Jason Segel (“How I Met Your Mother”).

In Bad Teacher, Diaz plays Elizabeth who is foul-mouthed, ruthless and inappropriate. She drinks, she gets high and she can’t wait to marry her meal ticket and get out of her bogus day job. When she’s dumped by her fiancé, she sets her plan in motion to win over rich, handsome substitute Scott (Timberlake). While competing for his affections with an overly energetic colleague, Amy (Lucy Punch), Elizabeth also finds herself fighting off the advances of a sarcastic, irreverent gym teacher (Segel).

Of course, when you star in a film about teaching, you get the inevitable questions about the current state of American education. Timberlake notes that “Man, we’ve got to pay our teachers more. Many are like surrogate parents.” After all the interviews, the cast realized that “we probably learned more from those that taught us life lessons. There’s such a huge responsibility and they’re under-appreciated and underpaid.”

With a movie as irreverent as Bad Teacher, the interview was equally irreverent, so that last quote was about the only straightforward quote from the entire interview. Besides, what would you expect from a film that contains the most iconic dry-humping scene in cinematic history?

Timberlake interjects, “I think we created the ONLY dry-humping scene in cinematic history.”

It was awkward because “Jake [Kasdan, the director] was in between us, not literally. [While] there’s nothing wrong with a good jean jam, collectively, the both of us [Diaz and Timberlake] felt we had a responsibility to young people” to do “a public service announcement for safe sex.”

Diaz agrees, “That’s pretty much the only message that’s in the whole movie. Other than that, there’s nothing else [message-wise].”

We felt that “we can’t make a movie that’s just about nothing. If we’re going to try to be role models in any way, we should at least offer up a jean jam.” Timberlake sums up the whole jean jam scene beautifully, “And it was jammin’.” Trust me when I say that after watching that scene, a pair of blue jeans will never seem as benign again.

When you have a musician of Timberlake’s caliber in your cast, how can you not use his musical talents? Timberlake’s character Scott is in a band with his fellow teachers and performs an original song for Amy that manages to be both heart wrenching and groan inducing at the same time.

“In the script there was a loose idea about the teacher band and Scott doing a singer-songwriter thing.” The lyrics were written by Lee Eisenberg and Gene Stupnitsky and then Timberlake “tried to create the terrible melody that I did. The mission was to make it so bad that they wouldn’t be able to market it.” And Kasdan agrees, “I think we succeeded in that.”

They all agree that it took a collaborative effort between the four of them to create something so heartfeltfully (I know that’s not a word, but trust me, it fits perfectly.) cheesy. Kasdan explains, “We had the idea that Scott could sing the worst song ever written proudly. And Justin nailed that thing for sure.”

With the popularity of movies like Bridesmaids, the cast was asked if the public is ready for raunchy female-driven comedy. Diaz thinks that women have always been raunchier than men, but men never want to hear about it so they put their fingers in their ears and say ‘la la la.’

Timberlake replies, “As a male who enjoys raunchy women, I think that funny women have been around forever – Carol Burnett, Madeline Kahn – and that there are genius, genius female actors in comedy. We’re in an age now where technology has afforded a generation a lot more crass look at the world. The Internet can be a really strange place to be. What we can understand about brash humor is that it has different levels so we can push the envelope in a way that will get laughs. That’s what’s cool about this movie is seeing a female in such a role and doing it as well as Cameron does.”

Since Timberlake is sympathetic to the trials of American teachers today, he did have some sage advice for a teacher who had a profound effect on his life, “I had a teacher in seventh grade who told me that I should have more realistic goals than being a songwriter … and you can quote me on this – suck it teacher.”