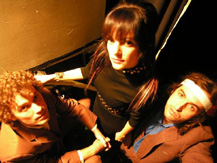 Yes, there is a band from Los Angeles named Vagenius. Yes, the music does kind of have that retro-pop feel to it. Yes, the lead singer plays the keytar. Yes, she occasionally sports a 10-inch platinum blonde mohawk. Yes, the drummer usually wears a headband. And, yes, I know what you’re thinking. But get over it.

The band is sick of critics judging their book by its cover. Look beyond the name, hair, clothes and instrumentation. If you don’t, you’ll be missing what Vagenius is all about – the music.

"We are definitely not electroclash," says drummer Joachim Cooder.

Singer/keytarist/bassist Juliette Commagere, stunning and flashy on stage as the front woman of the trio, is down to earth like one can only wish more musicians would be. And she agrees with Cooder.

"Electroclash is more about clothes and the ’80s," Commagere says. "I feel like we’re actually writing songs; old-style songs, not necessarily ’80s songs. I mean, I like to have fun and get dressed up, but I’m also trying to make music and push myself to write the best songs I can write and sing the best that I can sing."

This is an idea that has developed more seriously over the years that the trio’s members have known one another. Commagere and Cooder met at a seventh grade picnic, where all the girls flocked to the tall, young Cooder, screaming his first name and trying to get his attention. (Actually, that still happens to him.) Commagere could not help but take notice, and eventually they started a Mexican-American country-roots band called Radio Bemba. Guitarist/keyboardist/renaissance man Jared Smith joined the band after stumbling upon Cooder while they were both attending Cal Arts, in Valencia.

But obstacles and mistakes took over Radio Bemba. Finding common ground between the band’s seven members became stressful. There was controversy over another artist using the same name. They were showcasing for labels too soon. And when it came down to it, Commagere, Cooder and Smith were at the core of the band.

After the dissolve of their first band and a short stint with poor guidance from managers and unhelpful producers, the three decided to "start at the very bottom," recalls Cooder. "It became a constant evolution for us."

A year spent practicing was followed by the need for a new band moniker. Airport, to commemorate the band’s practice spot in a storage space at the Santa Monica airport, was already in use by another band. Lady Grenade was tossed out after female suicide bombers started headlining the news. With Commagere constantly using the term "vagenius," a friend dared them into calling themselves just that.

"Jared and I were reluctant at first," says Cooder. "We thought it would be really gutsy, but realized it really wasn’t. The world has become so homogenized and beyond corporate. There’s no counter culture anymore to the point where the silly name ‘Vagenius’ causes a stir and no one wants to take any chances. They do and they don’t."

Case in point: the all-ages Orange County venue, Chain Reaction, won’t book them because they’re scared parents will get upset. Some label reps and even their old lawyer didn’t want to help out or be associated with them under that name.

The temptation to change the name is there, but it’s not a major concern for the band’s members. Vagenius is more focused on its music. The mix of synth-rock-pop is reminiscent of the Killers, only tastier and with a Blondie aftertaste. They note ZZ Top, the Cars, Holland Wolf, and Ry Cooder as musical influences. And, of course, you can’t ignore the influence of the ’80s.

"We grew up in the ’80s, what do you expect?" says Smith. "If you listen to [our music], there’s an incredible amount of work going into it. It’s pure energy that is inside of us. We like well-crafted pop songs. You can write a pop song, but it’s hard to write a good one."

After two years of striving do just that, the work has paid off. Without a conscious effort for self-promotion, the band garnered attention when playing for a friend’s fashion debut in front of the old Vice store, in Silverlake. Francis Miranda produced their EP and they even toured with Kings of Leon earlier this year.

Nowadays, A&R reps swarm to Vagenius’ live shows, but the band’s members remain grounded with what they’re doing and why.

"We’re a lot more focused now. I think about it every single day," says Commagere. "We thought, ‘Wouldn’t it be fun? We’ll just play songs.’ We’re still doing that, but the band is a profession now. We’re so obsessed with our band that I think we’ve gone crazy. I think about it all the time, all day. Before, I just made music."