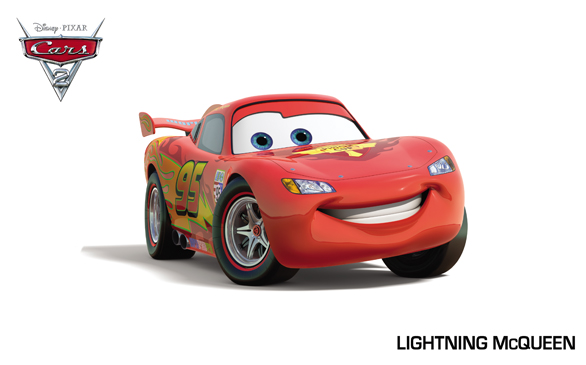 Academy Award winner John Lasseter picked up in Cars 2 where the original movie left off. He took a scene from Cars when Lightning McQueen (voiced by Owen Wilson) and Bonnie Hunt’s Sally were at a drive-in movie theater on a date while watching a spy thriller, hence the new character of Finn McMissile.

Lasseter figured that it would be fantastic to expand on the story and bring in the spy “car-acter” (as Pixar calls them). The only person who Lasseter thought would be right for the part of McMissile was Oscar award winner Sir Michael Caine. The director is a huge fan of Caine’s work and urgently contacted him to participate in the film.

“Well, the great thing of course is to be called Finn McMissile. I could resist it and then they said I was a spy and they said that ‘you’re a 1966 Aston Martin – pale blue,’ and I thought, ‘this is perfect for me.’I’ve got three grandchildren, and of course, the reason I really wanted to do it was because I wanted them to see me – they know my voice,” shares Caine. “They gave me a car with my voice – a little model car. I brought it back here and my grandchildren played with it, and they know it’s me so I’ve got this tremendous bond with my grandchildren through this film because if you think about it the films that I make, little children can’t see them, and so it was a wonderful opportunity for me. And the director is an incredible guy, by the way.”

The director took a different kind of approach this time around and recorded the actors’ voices separately, which didn’t faze Caine since he had done radio shows earlier on in his career.

The innovation behind Lasseter began when he was just 5 years old and won an award for a drawing. He was tapped to take over Pixar Studios after it was purchased by Steve Jobs from Lucas Films in 1986 but had already done a 3D film of his own. He went on to direct the Toy Story movies, which garnered numerous awards, and then made the Cars movies.

This is Wilson’s second time around for Lightning McQueen, but it was not the same without Paul Newman who recently passed away.

“On the first one, I did get to work one day with Paul Newman. We went to New York and I got to record with him, and it was great. He actually had some questions, because he was so knowledgeable about racing, and John took what he was saying and went back and reworked the script based on something that Paul was saying,” says Wilson.

Lightning’s relationship with Mater (voiced by Larry the Cable Guy) is challenged in this sequel, and the plot thickens once Finn McMissile and Holly Shiftwell mistake Mater to be a spy.

Caine’s performance in the film reflects on his ability to personify his spy-oriented parts in other films but took on the methodical approach for this role.

“I’m a method actor … There is a backstory to Finn McMissile; you know who he is, but a cut is very short,” says Caine.

He used the backstory to create the character and found it partly through his role as Alfred in the Batman films since that was he had been working on.

“His accent is what I call working-class posh … I imagine him as being working class but he went to very posh schools because he was so clever, therefore you’ve got this sort of accent. The voice that I use for him is sort of upper-middle class but not aristocratic,” says Caine.

Most of the actors in the movie are car enthusiasts, which also helped. Lasseter wrote the script along with Brad Lewis based on his desire to make a story that would appeal to audiences universally.

“I grew up loving cars and the Southern California car culture. My dad was a parts manager at a Chevrolet dealership, so Cars was very personal to me – the characters, the small town, their love and support for each other and their way of life. I couldn’t stop thinking about them. I wanted to take another road trip to new places around the world, and I thought a way into that world could be another passion of mine: the spy movie genre. I just couldn’t shake that idea of marrying the two distinctly different worlds of Radiator Springs and international intrigue, and here we are,” says the acclaimed director.

The movie was shot in stereoscopic 3D to give the audience the full effect of the story. It takes off from Radiator Springs only to lead the pack of cars away from home and into a wild race around the world that starts after a new character, Francesco Bernoulli (voiced by John Turturro), challenges Lightning.

Pixar had to step up to the plate and take on the challenge of finding new ways to move the camera as well as light the scenes, and then there was the challenge of creating headlights for Lightning.

“He races at night in Cars 2, so we had to add headlights. We had to figure out the geometry of his headlights because a big smile could run into the lights, so proper placement was critical.” says supervising animator Shawn Krause.

Most of the animation crew went to London and Tokyo as well as Italy to observe the different colors of those cities. Picking out the new characters for the film was a cinch since most of the actors had already voiced animated characters such as Joe Mantegna who voices Fat Tony on “The Simpsons.” Eddie Izzard voices Miles Axelrod who is a former oil baron in the film and is one of the villains along with Professor Z who is voiced by Thomas Kretschmann.

The whole movie strides smoothly and ultimately is a success after thousands of hours of work went into reshaping the cars. New characters were added to the movie, such as the Queen of England (voiced by Vanessa Redgrave) who is featured as a Rolls-Royce. Most of the cars in the movie were based on vintage cars with the exception of Holley Shiftwell (voiced by Emily Mortimer), but the models started out as standardized models only to become original cars that were made up by Pixar to fit the character (or “car-acter”) of the cars themselves and how they play into the film.

The backgrounds of the movie were “car-ified” to make them proportionate, which gives the audience a “car-iffic” view and ability to associate the backgrounds with the characters in the film. The three racing scenes are stunning because of the enhanced camera work that was put into the film.  Lasseter wanted the audience to view the cars from the level in which they would be racing, and there are some breathtaking scenes where the spies are chasing Professor Z with his minions.