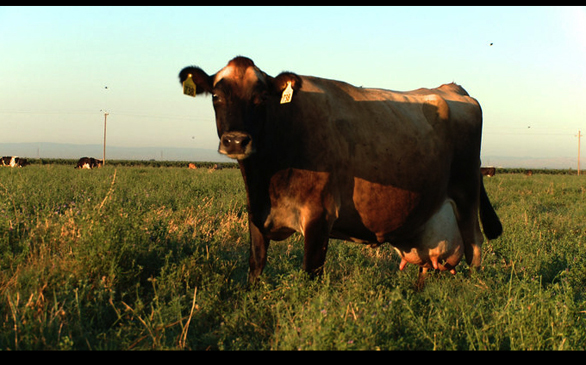 Do you know where your food comes from? Do you care? In a country where fast-food chains are allowed to sell you dangerously unhealthy meals at any time of the day, contributing to the high rate of obesity, diabetes and heart-related complications of its population, the United States Department of Food and Agriculture is closing in on … local, organic farms.

That is the picture that Kristin Canty explores in her compelling documentary, Farmageddon. Zooming in on family-owned farms in Vermont, Virginia and New York to Ohio, California and Georgia, Canty’s film gives voice to those who have made natural agriculture their livelihood. She exposes how big industrial corporations, through government agencies, are bullying little businesses for profit. One particularly disturbing scene is when Jackie Stowers, a mother who runs a local co-op in Ohio, describes a SWAT team’s invasion of her house:

“I came around the corner, I was at the top of the stairs and what I saw was a man right here with a gun pointing up at me and all I could see was a black hat and a black jacket and a gun. And I stood there thinking that this was a serial killer … All I could focus on was a man, a gun and my children.”

The documentary shows another footage of a team of police raiding what looks like an innocent, produce store in Venice, Calif. It looks like the type of search more appropriate for busting drug lords, and there is something seriously wrong in watching law enforcement humiliating and destroying the small businesses of seemingly harmless people in overalls who grow produce and raise farm animals.

Although the film’s subject matter may not appeal to the majority of a society of 24-hour drive-thrus and processed “diet” power bars, it effectively exposes the politics behind the food that is, or in this case, that isn’t on your plate. The documentary is informative and engrossing, and although it may not convince you to search far and beyond for a bottle of raw milk for its better health benefits, it will make you think twice what you put in your body. Farmageddon also enlightens about government control, politics and the “little man.” How much freedom do we really have, and how much of it is being spoon-fed to us by the government?