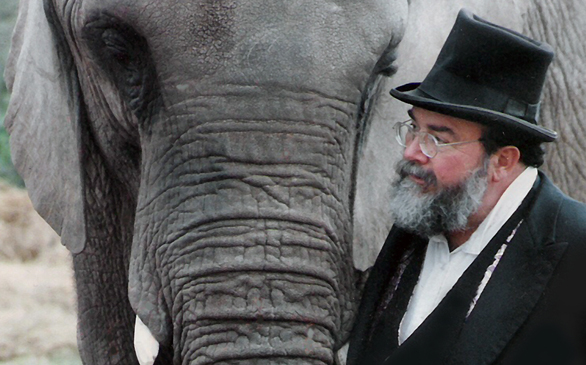 In a film culture that is enthusiastically obsessed with domesticated pets and expresses a great – yet more distant – fascination with exotic animals living in the wild, director Lisa Leeman brings forth a hybrid that tells the story of Flora, an African elephant who grows up in the care of circus owner David Balding. One Lucky Elephant took 10 years to make, and the final product offers its audience a good glimpse into the life of a circus animal and its adoptive owner as they part ways.

In 1984, Balding adopted a 2-year old baby elephant who was orphaned in Zimbabwe, a place which then endangered the species with ivory poaching and government sanctioned cullings. For over 18 years, raised as a part of a human family, Flora performs with Balding in a circus that bears her name. The bespectacled, aging man whose health seems to be falling apart realizes that at her age and with her display of developing aggression, Flora isn’t happy performing anymore. So he must give her up and decide the best arrangement for his beloved pet.

Although the documentary is full of endearing “aw” moments, Leeman also succeeds in exploring the questionable nature of domesticating a wild animal for human entertainment and profit. There is no doubt that Balding truly has a loving, familial attachment to Flora (She was even part of the procession of his wedding.), yet it becomes clear that he renders the animal ill-equipped in surviving under the care of other people or with other elephants like herself when he is gone. When the elephant sanctuary owner that he leaves her with tells him that Flora’s aggression may have rooted from an early traumatic experience in her life – and that visiting her will only ignite her feelings of abandonment – Balding and his wife find another expert, whom they call a sort of “elephant whisperer,” to dispute the theory.

There is no Cruella de Vil in this movie, but there are however, conflicting interests. Does Balding have Flora’s mental health in mind or is he giving in to his personal need to be with his pet? Is rescuing an animal to be used in a circus a morally logical thing to do, or is it wrong? One Lucky Elephant doesn’t attempt to give an answer. But it accomplishes what it set out to do, which is to inform and bring the issue into conversation in society.