Rolling Into History: Gettysburg by Segway 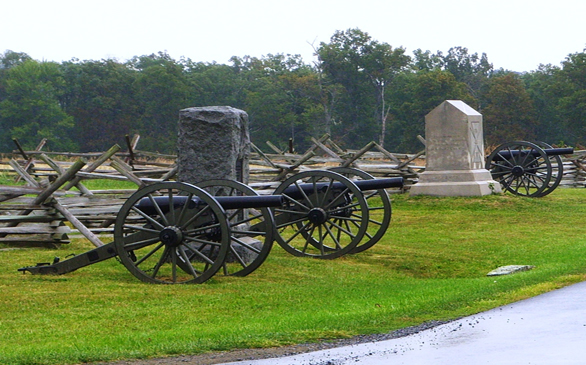 You’re going to be hearing a lot about the Civil War for the next few years. This year marks the beginning of the sesquicentennial of the four-year-long conflict and each state and battleground, over the next four years, will be commemorating the 150th anniversary of its particular part in the war. The bloody battle of Gettysburg, Pa. took place in 1863 and the historic town will host various sesquicentennial re-enactments in 2013, but Gettysburg welcomes visitors every single day. And indeed, war is hell and any visit to Gettysburg will include somber moments. But learning about history doesn’t have to be stuffy, especially when you’re hanging out with ghosties, partying with President Lincoln or rolling around Gettysburg on a Segway!

When the sun goes down Johlene “Spooky” Riley and her staff come out to lead candlelit walking tours of haunted Gettysburg, taking those who dare to places like the Arbor House, a structure built on battlefield and formerly home to many shallow graves. You might see a phantom little girl peeking out the window of one of the rooms at the Dobbin House Tavern, and your camera may catch the image of a long-dead Civil War-era soldier along the Haunted Creek Bed. For sure you’ll enjoy Spooky’s storytelling and learn a little about Gettysburg as you prowl this very-haunted area. Tours are conducted nightly and last about one hour. gettysburgghosttours.com

Four Score and Seven Years Ago…

The Dobbin House Tavern is Gettysburg’s oldest and most historic building and it sits right across the street from the place where President Lincoln gave his famous Gettysburg Address. You can lodge here, eat and drink here, or just use the centrally-located Dobbin House as a jumping off point for all things Lincoln, including taking a look at the “Return Visit” statue of Lincoln that’s known as the “most true-to-life” depiction of Lincoln ever created, no surprise since sculptor J. Seward Johnson, Jr. used a cast of Lincoln’s face to create the artwork.

You can also take a walking tour that stops at the same places the president did when he spent his day in Gettysburg or take a simulated train ride that replicates Lincoln’s arrival in Gettysburg by rail. And you just might run into Honest Abe somewhere on the streets of Gettysburg or schmoozing with guests at the Dobbin House. When you meet the actor who plays Lincoln you’ll swear you’re talking to our 16th president himself! dobbinhouse.com.

If you’ve ever ridden a Segway you know that they’re a blast; if you’ve never been on one then here’s a chance to rectify that situation in a very unique setting. Seg Tours offers a relaxing two and a half hour tour of the Western  (main) Battlefield that takes you to famous places on the battlefield like Seminary Ridge, Pickett’s Charge, Peach Orchard, Little Round Top and High Water Mark. You’ll wear an earpiece during the ride so you can hear the tour guide explain what went on at these places, and you can also ask questions via the electronic gear.

The tour guide knows the best places to stop to get photos, and the tour also pauses several times for rest and refreshments. Shorter tours are available too, and everyone gets trained on how to safely operate the Segway (It’s easy!). segtours.com.

The Battle of Gettysburg Cyclorama is a 360-degree circular oil-on-canvas painting that depicts Pickett’s Charge, the climactic Confederate attack on the Union center on July 3, 1863. The cyclorama draws you right into the battle as rifle fire cracks, cannons thunder and special effects simulate explosions. A narrator explains the action and lighting changes so you can see the battlefield at night, only for the carnage to be revealed as the “sun” comes up. This must-see exhibit is located near the entrance to the Gettysburg National Military Park.

When planning your visit to Gettysburg be sure that you don’t leave yourself short of time; you’ll need at least a couple of days just to see all the magnificent monuments on the battlefield. And don’t forget, there are some ghosts expecting you too.