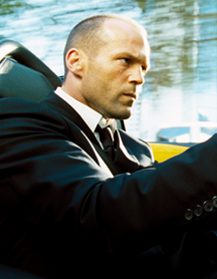 For only being in the business of making movies for about eight years, 33-year-old, London-born Jason Statham – who stars in the action-packed Transporter 2, which releases in theaters Sept. 2 – isn’t doing too bad for himself. The sequel to the successful 2002 flick The Transporter will mark his 14th film since the inception of his career as an actor. And, if that’s not enough, the muscled Brit has another five films – including February’s Steve Martin-headlined Pink Panther – already lined up.

This impressive, Hollywood-based career roster isn’t too bad for the former Olympic diver and medal-winning athlete, who only got into acting via one of those "one-in-a-million, right-place-at-the-right-time" sort of coincidences.

Apparently, Statham – who was constantly pursued by film crews and photographers while training at the Crystal Palace National Sports Centre in London – eventually caved in to the incessant pressures of the media. He began appearing in various commercials and print campaigns and, when on assignment for United Kingdom-based clothing company French Connection (FCUK), managed to score a meeting with director Guy Ritchie. The owner of FCUK was serving as one of the executive producers on the 1998 Ritchie film Lock, Stock and Two Smoking Barrels and introduced pinup Statham to the visionary indie filmmaker.

Shortly after Statham’s film debut as Bacon in Lock, Stock and Two Smoking Barrels, Ritchie used the handsome Brit again in the 2000 gangster flick Snatch, in which Statham played a boxing promoter named Turkish opposite the likes of Brad Pitt, Benicio Del Toro, Vinnie Jones and Dennis Farina. The roles kept coming after that, as Statham landed parts in Ghosts of Mars, Mean Machine and The One, costarring martial arts genius Jet Li.

The big guns (both literally and figuratively) were finally pulled out for the actor, though, when Luc Besson – the writer/director/producer famous for finding and developing fresh, new talent (just think of a 13-year-old Natalie Portman in his 1994 film The Professional) – began to write an action flick called The Transporter with the lead role designed specifically for Statham.

While Besson didn’t direct Transporter, he served as writer and producer on the film, which introduced audiences to the character of Frank Martin (Statham), a no-holds-barred, ex-Special Forces operative who hires himself out as a mercenary "transporter." Basically, this means that he transports packages – material, human, whatever – from place to place, no questions asked. Although it’s against Frank’s personal code to look inside the packages he’s delivering, he eventually breaks the rules when he realizes his latest delivery is moving. When he opens it, he sees that it’s a beautiful young woman; and as a result, he begins to question his line of work.

According to Robert Mark Kamen, who wrote both Transporter films alongside Besson, Statham was the perfect person to fill the lead role. "Jason has humanity and decency; he makes both traits come alive in Frank Martin, even though Frank is as tough as they come," says Kamen.

Statham continues, elaborating upon the reactions of moviegoers to his performance in the original Transporter. "Everywhere I went, people would tell me how much they loved The Transporter and the character of Frank Martin. The Transporter is an especially important role for me because it’s influenced my career more than any film I’ve done."

This would explain why – even though he’s appeared in a handful of films since The Transporter opened to mixed reviews in 2002, including The Italian Job, Call of Duty, Collateral and Cellular – the sequel to the film that officially introduced Statham to audiences as a leading man and action star was inevitable.

In the sequel, Transporter 2, Statham returns to his signature character Frank Martin, who, when the film opens, has relocated from the French Mediterranean to the colorful city of Miami. As a favor to a friend, Frank is working as a driver for the wealthy Billings family – and, surprisingly, Frank forms a bond with 6-year-old Jack (newcomer Hunter Clary), the youngest in the Billings clan.

"Frank is such a disconnected character, we thought it would be fun to have him drive for a youngster," says Kamen about Frank’s continued interaction with Jack. "Frank has no real experiences with children. Jason’s scenes with Hunter are really interesting, because Frank treats the boy like a grownup – that’s all he knows how to do!"

With this new, close-knit relationship between himself and Jack, Frank must put his battle-tested combat skills into action when the youngest Billings is kidnapped. Not only must Frank find the little boy, but he must simultaneously thwart the kidnappers’ plan to release an extremely deadly virus on society.

"Frank has evolved from the time of the first film. There’s a lot more at stake, emotionally, for Frank," says Statham, who also enjoyed the mix of the character’s softer and tougher sides. "One day I’d be playing a tender, emotional scene opposite Amber Valetta [who plays the young kidnap victim’s mother] – the next day, I’d be taking on a team of international thugs in a massive fight scene. It was never boring."

According to Transporter 2 helmer Louis Leterrier, who served as artistic director on the first film, the appeal of both films mostly rests on Statham’s believable portrayal of Frank Martin.

"Jason really brought out not only the character’s amazing physicality, but Frank’s humanity as well," says Leterrier. "Jason plays Frank as a reluctant warrior. Frank wants to stop doing shady jobs; he craves an ordinary life. But fate likes to play tricks on Frank and, in the new film, he has to take on another ‘worst-case’ situation."

Shady situations and inevitable sequel comparisons aside, though, Statham – who recently finished shooting Revolver, his third film for director Guy Ritchie – said that there was definitely one very specific plus to revisiting the role of Frank Martin: driving cars at extremely high speeds.

"Driving that high-speed car was a real rush," says Statham, who gets behind the wheel of a beautiful black Audi A8 in Transporter 2. "But I’ll admit that training for and performing the stunts was easier the second time around. This time, I knew what I was in for!"

Interviews
Lily James and Sebastian Stan find a real relationship at the heart of 'Pam & Tommy'
81 views
Interviews
Ricky Gervais knew people would be mad about his new Netflix special. He did it anyway
577 views

Interviews
The star of Oscar-nominated 'Flee' gives his first interview: 'I wanted my story to be seen'
1,117 views