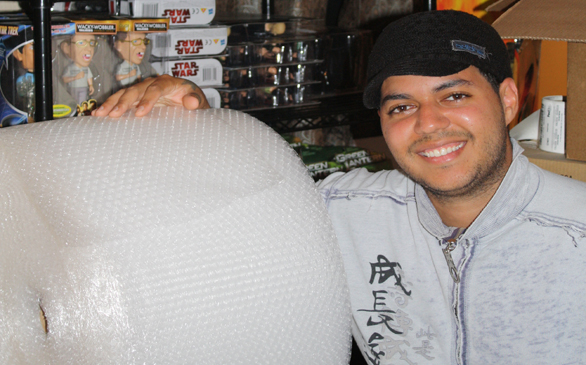 UCLA 2007 graduate Robbie Cabral is the creator of an online retail company called Figure of the Day that launched on May 6 of this year, just in time for the premier of Thor. So, Cabral’s debut “figure of the day” was Thor. Each day, Cabral features and sells one special figurine, unlike other companies who sell a myriad of toys. His instincts urged him to start his online company this year because he believes that summertime, when most superhero movies launch, is the best time to market action figures.

Upon graduating from UCLA extension with a degree in Music Business and Management, Cabral realized that his love for music and even being part of a band did not pay the bills. He started working two jobs: server for UCLA Dining and marketing and advertising specialist for various industries such as wine. But these jobs are just for one purpose: to pay the bills. He is grateful for a steady income that these jobs provide for his family, however, he yearned for an outlet that expresses his passion for business and collectables.

In observing the economy and first handedly experiencing the harshness of the job market, Cabral treaded away from the idea of working for someone else. He desired to be his own boss. This desire inspired him to become an entrepreneur and “to do his own thing.” Equipped with the skills of marketing, advertising and networking with individuals from diverse cultures at UCLA, Cabral felt confident in pursuing a startup company.

Each day, Cabral features a character from comic books and movies such as Captain America, Victoria from Twilight, Darkman and Spartan Kratos. He attempts to widen his market audience to everyone, though males have shown more interest in his figurines. Cabral sells each figurine for less than $20 and provides free shipping to encourage buyers.

He aspires to sponsor huge companies such as Warner Bros. Pictures on his site and even acquiring advertisements from companies like Mattel Toys. Since his launch, he has processed more than 100 orders, and amazingly, he already has returning customers. It is crucial for him to earn customer loyalty as he works very hard to satisfy his customers’ requests. In addition to his Web site, he has Facebook and Twitter pages that give hints for future figures of the day.

Cabral’s company is indeed a partnership. While his wife Brach, who works full time as a teacher, takes charge of blogging about the figurines, Cabral handles the purchasing of products and shipping to customers all over the United States. With the support of his wife, Cabral steps into the digital retail scene with conviction.

Cabral hopes that in the future, he can dedicate 100 percent of his time towards his online company instead of dividing his time between two jobs and the company. Focusing on one job will enable him to gain more leisure time to watch Lakers basketball games, play music and video games, go to the movies with his wife and spend time with his baby daughter.