Symphony X: The Convergence of Sophistication and Brutality 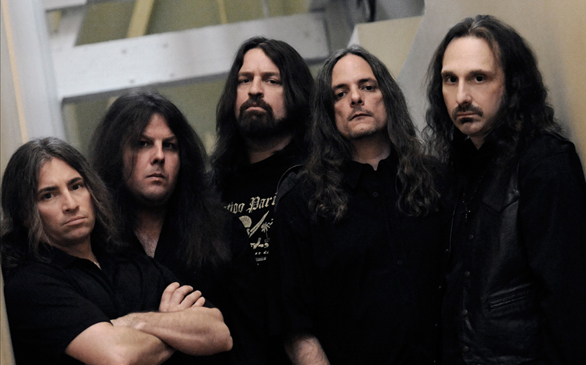 In progressive rock, a genre adept to concept albums and metaphysical themes, it’s not uncommon for a band to build an identity based on grandeur. New Jersey’s Symphony X is no exception, as it continues to build on its success of 2007’s Paradise Lost with its eighth studio release, Iconoclast.

The man vs. machine angle has been done and tried in music, film and books, but Symphony X’s take on it is refreshing because it intertwines the sophistication of classical string arrangements with the modern barrage of guitar riffs and pummeling percussion.

“Usually every album we do, we try to find a little something different to do. It may be a concept or a theme or just something to give each record its own personality,” guitarist and founder Michael Romeo says.

Although Romeo admits that Paradise Lost is Symphony X’s only concept album, one would be hard pressed to not think of Iconoclast as the same. With its underlying theme of a dystopian future in which machines overtake man, it’s sort of difficult to believe that Romeo accidentally stumbled upon the idea.

“It’s really not a concept. Yeah, there is an underlying theme, but it’s not like a story-record or anything. Each song is its own song. I just think that, for us, it’s kind of cool to find some kind of a topic or a theme and loosely … thread ideas together,” Romeo says.

It was during the early stages of putting together Iconoclast that Romeo, a huge film buff, listened to soundtracks for the movies 300 and The Matrix. About five songs were written at that point, when Romeo decided to focus on the metallic-sounding nature of both soundtracks as something that might work with Symphony X.

“We’re just looking at it to give each album its own sound, and it just turns out that way for us. You could consider that it is a concept [album], but to us it’s really not,” Romeo states.

Iconoclast comes out as a regular release and a special-edition double disc album that Romeo says is the “real” album.

“Most of our fans and people who know what we do, they kind of know that the double record isn’t like the regular record with some leftover junk or some bonus tracks. We wrote 85 minutes of music, and that was our intention from the beginning,” Romeo continues. “There’s a lot of new people coming on board who maybe haven’t heard of the band or really aren’t familiar, so maybe they’ll test the waters with the single record.”

Fans have noted that the last 11 years of Symphony X’s history have seen greater gaps in studio releases. To compare: From 1994 to 1999, the band released four studio albums and one compilation album. Since 2000, they have released four studio albums and one live album. To Romeo, the gaps don’t seem as big because of an ambitious touring schedule that lasts upwards of two years.

Symphony X toured the hell out of the rest of the world before they began touring the United States because interest in the band was greater overseas. With the release of 2000’s V: The New Mythology Suite, Symphony X skyrocketed to one of progressive metal’s elite, eliciting comparisons to titans like Dream Theater. The comparisons flatter Romeo as opposed to bothering him, but he does note differences.

“I grew up with [Judas] Priest, [Iron] Maiden and [Black] Sabbath. I think we have a back-to-the-old metal kind of thing. We have a different kind of sound and a different approach to songwriting,” Romeo says.

Perhaps more ambitious than their touring schedule is the band’s constant pursuit of perfection. It can take them more than a year to get the sound right on an album. As producer and composer on Iconoclast, Romeo notes the stress of gelling behind and in front of the soundboard.

“We know each other so well now. We’re in that groove once we start recording, and it just takes a while to find it. With this record, it was ‘What can we do to make it different?’ and some of the struggle is right up front … trying to find the right sound and the right direction.”